Getting Food into Space 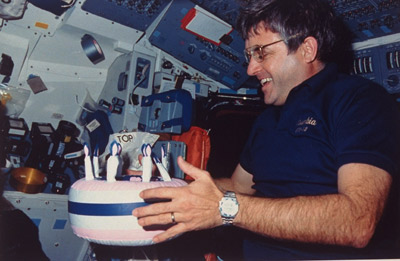 About a month before a mission launches, all food that will be taken aboard is packaged and stored in refrigerated lockers at the Johnson Space Center. Three weeks before launch, the food is transported to Kennedy Space Center in Florida. It's loaded onboard the shuttle two to three days before launch.

The space shuttle carries about 3.8 pounds of food, including 1 pound of packaging, per astronaut for each day of the mission. The astronauts get three meals a day, plus snacks. A back-up Safe Haven food system provides an extra 2,000 calories per day, per astronaut. It's designed to sustain the crew for an extra three weeks in case of emergency.

The meals are stored in locker trays, arranged in the order that the astronauts will eat them. Considering that a space mission can last months, foods in space need to be designed and packaged to prevent spoilage. Because the space shuttle doesn't have a refrigerator, foods must stay fresh at ambient temperatures. There are several ways space food can be prepared:

Food packaging is designed to be easy to use, small enough to dispose of in the onboard trash compactor and sturdy enough to keep food fresh for up to a year. Rehydratable foods are packaged in flexible bowls with lids. A fabric fastener locks the bottom of the bowl to the meal tray. Foods can also be kept in cans with pull-off lids, plastic cups or flexible pouches. Astronauts add water to rehydratable food bowls and drink pouches through a small opening called a septum adapter.

Condiments like ketchup, mustard and mayonnaise have their own packaging. Salt and pepper are stored in liquid form so that the crystals or granules don't float away. Salt is dissolved in water while pepper is suspended in oil.

The space shuttle gets its water supply from fuel cells, which produce electricity by combining hydrogen and oxygen -- the main components of water. At the International Space Station, water is recycled from the cabin air. Because there is little water to spare, most foods on the Space Station are thermostabilized rather than dehydrated.

But how do astronauts actually prepare a meal in microgravity? And what will astronauts be eating on future missions? Find out in the next section.

Does food taste the same when you're floating thousands of miles above the Earth's surface? Scientists say no. In the weightless environment, food aromas don't quite make it to the nose. Because smell is a big part of taste, astronauts miss out on a lot of the foods' flavors. Weightlessness also causes fluids to accumulate in the astronauts' upper body, giving them perpetual stuffy noses. If you've ever tried to eat when you had a cold, you know that congestion makes for very bland tasting food.