The History of Space Food 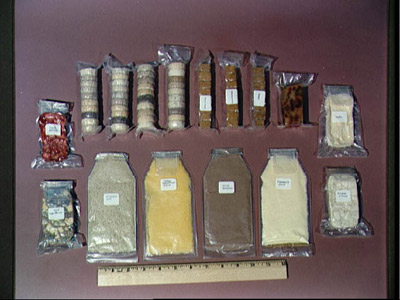 Because the first space flights lasted just a few minutes, there wasn't much need to carry food onboard. But by the early 1960s, John Glenn and the astronauts of Project Mercury were staying out for longer durations and had to eat. The first space foods were unappetizing, to say the least. Most were semi-liquids that were squeezed from tubes and sucked up through straws. There were also bite-sized cubes of compressed and dehydrated foods that were rehydrated by the saliva in the astronauts' mouths.

By the time the Gemini mission launched in 1965, the food had gotten a bit more palatable. The astronauts were able to choose from a wider variety of foods, including shrimp cocktails, turkey bites, cream of chicken soup and butterscotch pudding. The food was freeze-dried, meaning that it was cooked, quickly frozen and then put in a vacuum chamber to remove the water. Freeze-drying preserved the food for the flight without compromising the flavor. To rehydrate the food, the astronauts simply injected water into the package with a water gun.

For the Apollo program -- the first to land men on the moon -- NASA provided its astronauts with hot water, which made rehydrating foods easier. The Apollo astronauts were also the first to have utensils and no longer had to squeeze food into their mouths. The mission introduced the spoon bowl, a plastic container with dehydrated food inside. After the astronauts injected water into the bowl to rehydrate the food, they opened a zipper and ate the food with a spoon. The wetness of the food made it cling to the spoon instead of floating away.

­The Skylab program of the 1970s used trays like this to keep food in place.
NASA Johnson Space Center (NASA-JSC)

The Apollo mission also introduced thermostabilized pouches called wetpacks. These flexible plastic or aluminum foil pouches kept food moist enough so that it didn't have to be rehydrated. The Apollo crew was able to dine on bacon squares, cornflakes, beef sandwiches, chocolate pudding and tuna salad. As Apollo 8 circled the moon on Christmas Eve 1968, the crew even feasted on fruitcake.

The Skylab mission, which launched in 1973, had even more of the comforts of home. The large dining room and table actually allowed astronauts sit down and eat. Skylab had the luxury of onboard refrigeration (which even the modern space shuttle doesn't have), so it could carry a wider variety of foods -- 72 different types of menu items in all. Food warmer trays allowed astronauts to heat their food in-flight.

By the early 1980s and the launch of the first space shuttle, meals looked almost identical to what astronauts ate on Earth. Astronauts designed their own seven day menus selected from 74 different foods and 20 drinks. They prepared their meals in a galley with a water dispenser and an oven. When the Space Shuttle Discovery launched in 2006, it was clear space food had entered a new realm. Restaurateur and celebrity chef, Emeril Lagasse, designed a menu that included selections like "kicked-up" mashed potatoes, jambalaya and bread pudding (with rum extract since alcohol is not allowed in space).

But who determines which foods make the mission menus? What kinds of food make it into space? Go to the next page to find out more.