The Men in Black Encounter 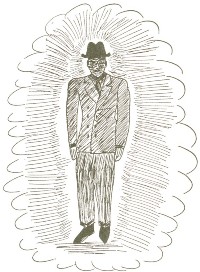 Albert Bender drew this sketch of one of the men in black. The "Bender mystery" provided endless fodder for UFO buffs of a paranoid disposition.
Mary Evans Picture Library

In 1987, writing in the respected Journal of American Folklore, Peter M. Rojcewicz examined "folk concepts and beliefs in 'other worlds'" as they related to "men in black" (MIB) legends. One classic tale of an MIB involved a man with the pseudonym "Michael Elliot."

One afternoon, as Elliot sat in a university library immersed in UFO literature, a thin, dark-featured man approached him. Speaking in a slight accent, the man asked Elliot what he was reading about. Flying saucers, Elliot replied, adding that he had no particular interest in their reality or unreality, just in the stories told about them.

The stranger shouted, "Flying saucers are the most important fact of the century, and you're not interested!?" Then the man stood up "as if mechanically lifted"; spoke gently, "Go well in your purpose"; and departed. When Elliot went to follow the man, he found the library eerily deserted. A year or two after his article appeared, Rojcewicz confessed that he was "Michael Elliot."

10 Fastest Things in the Universe
Top 10 Moments in Space Bathroom History
Leonid Meteor Shower: What You Need to Know