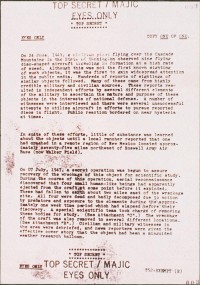 In December 1984 a package with no return address and an Albuquerque post-mark arrived in Jaime Shandera's mail in North Hollywood, California. Inside was a roll of 35mm film. When developed, it turned out to contain eight pages of an alleged briefing paper, dated November 18, 1952, in which Vice Adm. Roscoe Hillenkoetter told President-elect Dwight Eisenhower of the recovery of the remains of two crashed spaceships.

In the first of these crashes, in e­arly July 1947, authorities recovered the bodies of four humanoid beings. According to the document, which appended a copy of what was supposed to be the actual executive order, President Harry Truman authorized the creation of a supersecret group called "Majestic 12" (MJ-12 for short) to study the remains.

Acting on a tip from sources who claimed to represent Air Force intelligence, Shandera and his associate William Moore (coauthor of The Roswell Incident) flew to Washington, D.C. They searched the National Archives looking for references in official documents to MJ-12. They found a July 1954 memo from Gen. Robert Cutler, an Eisenhower assistant, referring to an "MJ-12 SSP [Special Studies Project]" to be held at the White House on the 16th of t­hat month.­

When this document was released in May 1987, it sparked massive controversy. The document is believed to be a hoax, but the identity and motive of the perpetrator remain unknown.
Jerome Clark

In the spring of 1987 an unknown individual, allegedly associated with an intelligence agency, gave British writer Timothy Good a copy of the MJ-12 document. Upon learning Good was going to disclose its existence to the press, Moore and Shandera released their copy, along with the Cutler memo. The result was a massive uproar, including coverage in The New York Times and Night line, an FBI investigation, and furious controversy that continues to this day.

For various technical reasons most investigators agree tha­t the MJ-12 document is a forgery, but the identity of the forger remains a deep mystery that even the FBI cannot crack. The forger apparently had access to obscure official information, much of it not even in the public record, leading to suspic­ions that an intelligence agency created the document for disinformation purposes. Whatever the answer, the MJ-12 document is surely the most puzzling hoax in UFO history.