George Adamski and the Space Brothers 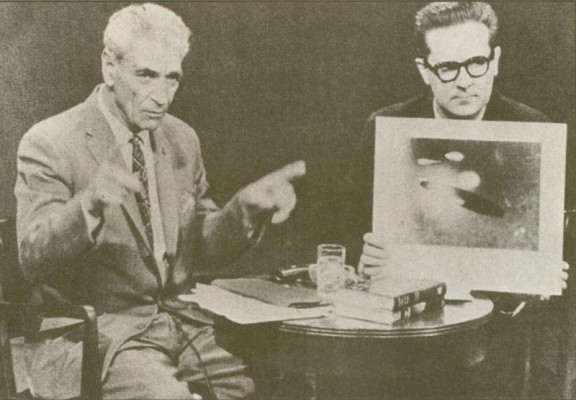 The most celebrated contactee of the 1950s was George Adamski. New York radio and television personality Long John Nebel provided Adamski with a forum to promote his books and photographs, though Nebel did not hide his personal skepticism.
Fortean Picture Library

Consider the case of George Adamski: Born in Poland in 1891, Adamski came to America in his infancy. He received a spotty education and developed an early interest in occultism. By the 1930s Adamski had established a niche as a low-rent guru in Southern California's mystical scene. He founded the Royal Order of Tibet, whose teachings drew on his psychic channelings from "Tibetan masters." In the late 1940s "Professor" Adamski produced pictures of what he said were spaceships he had photographed through his telescope.

The pictures attracted wide attention. But the events that began on November 20, 1952, would make Adamski a saucer immortal. Responding to channeled directions from extraterrestrials (who had replaced the Tibetan masters, though their messages were identical), Adamski and six fellow occult seekers headed out for the desert. Near Desert Center, California, he separated from the others and met a landed spaceship. Its pilot was a friendly fellow named Orthon, a handsome, blond-haired Venusian.

In his first book Adamski told of his conversation with a Venusian in the California desert.
Mary Evans Picture Library

Serious UFO investigators scoffed, but other people all over the world believed, even as Adamski's tales grew ever more outrageous. Adamski's 1955 book Inside the Space Ships recounted his adventures with Venusians, Martians, and Saturnians, who had come to Earth out of concern for humanity's self-destructive ways. These "Space Brothers," as Adamski and his disciples called them, proved a long-winded lot, fond of platitudes and full of tedious metaphysical blather.

In Adamski's wake other "contactees" emerged to spread the interplanetary gospel and to count the take at gatherings of the faithful. The principal gathering was held every summer at Giant Rock, near Twentynine Palms, California. The driving force behind the Giant Rock gatherings was George Van Tassel, who had established psychic contact with extraterrestrial starships ("ventlas") in early 1952. A few months later he rushed into print the first modern contactee book, the misleadingly titled I Rode a Flying Saucer! The following year, Van Tassel would get to do just that when his pal Solganda invited him inside a spaceship for a quick spin.

At the space people's direction, Van Tassel established the College of Universal Wisdom and solicited donations for the construction of the "Integratron," a rejuvenation machine. When completed, Van Tassel told his supporters, it would handle as many as 10,000 persons a day. People would emerge looking no younger, but their cells would be recharged. Untold tens of thousands of dol­la­rs later, the Integratron languished unfinished in February 1978 when Van Tassel died from the ravages of old age.

How Terraforming Works
Why Does Jupiter Have 79 Moons When Earth Just Has One?
NASA, UAE Space Agency to Cooperate on Getting Humanity to Mars