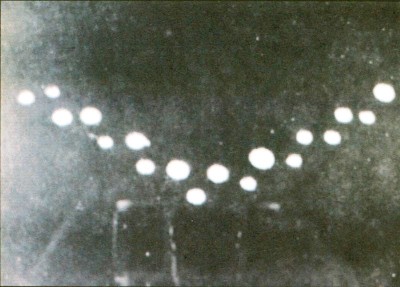 Nocturnal lights. Near midnight on the evening of August 30, 1951, during a spate of sightings of boomerang-shaped lights in Lubbock, Texas, college student Carl Hart, Jr., glimpsed a formation of 18 to 20 white lights through his bedroom window. Forming a perfect V configuration in two rows, they were passing silently over his parents' house from the north. Grabbing a 35mm camera, Hart raced outside, hoping they would return. A minute later the lights reappeared, and though they were visible for less than five seconds, he was able to snap two pictures. When the lights returned once more, Hart got three more pictures.

The local newspaper as well as the Air Force subjected Hart's photographs of the "Lubbock lights" -- as they are known in UFO lore -- to intensive investigation. No evidence of a hoax emerged then or later, and no conventional explanation could be found.

Hannah McRoberts did not notice this disc-shaped structure as she photographed a mountain on Vancouver Island in October 1981. After an investigation scientist and photoanalyst Richard F. Haines concluded this is an authentic photograph.
Fortean Picture Library

Daylight discs. From mid-morning to mid-afternoon on July 8, 1947, silvery disc-shaped objects bedeviled Muroc Air Base (later renamed Edwards AFB). Two discs first showed up at 9:30 A.M; they moved at 300 miles per hour at 8,000 feet altitude on a level flight path against the wind. A third disc, flying in tight circles, then appeared and headed toward the Mojave Desert with the first two. Some 40 minutes later a test pilot warming up an XP-84 aircraft saw another object, again flying into the wind. At noon, as a pilot was conducting a seat-ejection test at 20,000 feet, observers saw a UFO underneath it. The object was descending rapidly; it then headed north. Witnesses told Air Force investigators that "it presented a distinct oval-shaped outline, with two projections on the upper surface which might have been thick fins or knobs. They crossed each other at intervals, suggesting either rotation or oscillation of a slow type. . . . The color was silver, resembling an aluminum-painted fabric." At 4 P.M. an F-51 pilot encountered a "flat object of a light-reflecting nature" without wings or fins.

These sightings, Hynek wrote, caused the Air Force to "take a deep interest in UFOs."

Radar/visual. While driving east of Corning, California, near midnight on August 13, 1960, state police officers Charles Carson and Stanley Scott saw a lighted object drop out of the sky. Fearing the imminent crash of an airliner, they screeched to a halt and jumped out of their car. The object continued to fall until it reached about 100 feet altitude, at which point it abruptly reversed direction and ascended 400 feet, then stopped. "At this time," Carson wrote in his official report, "it was clearly visible to both of us. It was surrounded by a glow making the round or oblong object visible. At each end, or each side of the object, there were definite red lights. At times about five white lights were visible between the red lights. As we watched, the object moved again and performed aerial feats that were actually unbelievable."

The two officers radioed the Tehama County Sheriff's Office and asked it to contact the nearest Air Force base (at Red Bluff). Radar there confirmed the object's presence.

The UFO remained in view for more than two hours. During that time two deputy sheriffs and the county jailer saw it from their respective locations. According to Carson:

On two occasions the object came directly towards the patrol vehicle; each time it approached, the object turned, swept the area with a huge red light. Officer Scott turned the red light on the patrol vehicle towards the object, and it immediately went away from us. We observed the object use the red beam approximately six or seven times, sweeping the sky and ground areas. The object began moving slowly in an easterly direction and we followed. We proceeded to the Vina Plains Fire Station where it was approached by a similar object from the south. It moved near the first object and both stopped, remaining in that position for some time, occasionally emitting the red beam. Finally, both objects disappeared below the eastern horizon.

Carson noted, "Each time the object neared us, we experienced radio interference."

On April 21, 1967, at South Hill, Virginia, a warehouse manager driving home from work saw an object like a large water tank resting on the road. When he put his lights on it, the object abruptly ascended with a blast of white flame. The road burned for a few seconds, leaving an imprint for police to examine.
Fortean Picture Library

Close encounters of the first kind. J. Allen Hynek defines this as "a close-at-hand experience without tangible physical effects." A couple was driving north on Highway 45 north of Bristol, Wisconsin, at 11 P.M. on October 14, 1986. They saw flashing red and white lights that they took to mean that a car accident had occurred on the road just ahead of them. Approaching cautiously, they were stunned to find the real cause: an enormous triangular-shaped object hovering just above the concrete. The lights ran along the object's outer edge. "It was the size of a two-story house and spanned the width of the road," the husband told Don Schmitt of the Center for UFO Studies (CUFOS), the organization Hynek founded in 1973.

Close encounters of the second kind. In this encounter "a measurable physical effect on either animate or inanimate matter is manifested." Late on the afternoon of January 8, 1981, at Trans-en-Provence, France, a whistling sound disturbed Renato Nicolai as he worked in his garden. When he saw a lead-colored "ship" moving toward him from two pine trees at the edge of his property, he fled to a small cabin on a nearby hill. From there Nicolai saw the object, shaped like "two saucers upside down, one against the other," descend to the ground. Shortly thereafter it rose up and shot off toward the northeast. On its bottom Nicolai observed "two kinds of round pieces which could have been landing gear or feet."

Not long afterward the gendarmerie appeared on the scene and wrote in their official report: "We observed the presence of two concentric circles, one 2.2 meters in diameter and the other 2.4 meters in diameter. The two circles form a sort of corona 10 centimeters thick on this corona, one within the other. There are two parts clearly visible, and they also show black striations." Groupe d'Étude des Phénomènes Aerospatiaux Non-Identifiés (GEPAN), France's official UFO-investigative agency, took soil and plant samples to the nation's leading botanical laboratory.

After a two-year study GEPAN determined that a "very significant event . . . happened on this spot." GEPAN head Jean-Jacques Velasco wrote, "The effects on plants in the area can be compared to that produced on the leaves of other plant species after exposing the seeds to gamma radiation." In its 66-page technical monograph on the case, GEPAN cautiously acknowledged that the incident amounted to proof that a UFO had landed: "For the first time we have found a combination of factors which conduce us to accept that something similar to what the eyewitness has described actually did take place."

Close encounters of the third kind. In this occurrence "the presence of animated creatures is reported" inside or in the vicinity of UFOs. As he drove to work at 5:50 A.M. on August 25, 1952, William Squyres, a musician at a Pittsburg, Kansas, radio station, encountered a large disc hovering 10 feet above the ground about 250 yards away. He quickly brought his car to a stop, jumped out, and began walking toward the UFO. It looked, he would tell Project Blue Book investigators, like two bowls placed end on end, 75 feet long and 40 feet wide, with a 15-foot-high midsection. Along the side was a row of windows.

Through these windows Squyres detected movement of some sort, but he could not detect its cause. In one window he could see the head and shoulders of a motionless humanlike figure who seemed to be leaning forward and watching him. The UFO departed before Squyres could get any closer to it. As-it ascended, according to the Project Blue Book report on the incident, "it made a sound like a large covey of quail starting to fly at the same time."

This incident is among the few UFO reports Project Blue Book acknowledged it could not explain.