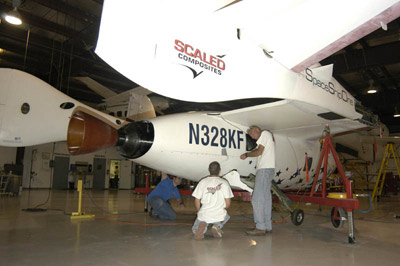 Creating a totally new kind of spacecraft from the ground up comes with its own set of challenges. Chief Engineer Gionta delves into some of the hurdles the Scaled team faced when creating SpaceShipOne.

"Lots of technical challenges," Gionta says to sum up the experience. He continues:

The design of a craft capable of traveling at faster than the speed of sound has unique characteristics and requirements. The designers have to pay special attention to performance, aerodynamics, load characteristics, stability and control of a ship that is meant to travel at both sonic and supersonic speeds.

The equipment needed to create and test such a craft isn't exactly an off-the-shelf technology. And that equipment came at no small price. Gionta explains:

Our whole goal was to prove that sub-orbital space tourism could be done very economically, and in so doing we always had to opt towards the least sophisticated but most robust solution for any problem that we were up against -- and always try to keep the cost down. So that was a biggie.

In many cases the Scaled team had to create the tools and features needed to make SpaceShipOne work. As an example, Gionta explained how the reinvented reaction control system on SpaceShipOne works:

When we're out in space, all you need to do is release a puff of air in a direction to give you a reaction force to push you the other way. That's pretty much what [a reaction control system] is. We have high-pressure air stored in bottles on the ship, and we release a little blast of air for about one second on, say, the right wing tip pointing up. And that is enough when you're in space to push that wingtip down. So it effectively rolls the aircraft, and that's your controls when you're out in space. It's the same thing a spaceship or the shuttle uses, except on a much, much smaller scale and much more economical. So we had to develop that. We created a fixed-based, full-mission simulation of the craft so we could size our reaction control system.

Additional challenges came in the form of air launching a spaceship:

... air launching another vehicle -- that was another something we hadn't done before ... Other craft [like] B-52s drop vehicles pretty regularly, but it was something new to us so that was a bit of a challenge, too. And it worked well, and so far we've just gotten pretty darn lucky, or, I don't know, maybe we know what we're doing. Who knows?

In the next section, we'll look at the privately funded space program that is producing SpaceShipOne: Tier One.

All of this rocketeering had to have the blessing of the U.S. Federal Government. On April 1, 2004, the Federal Aviation Administration's Office of Commercial Space Transportation issued the first-ever license for a sub-orbital manned rocket flight to Scaled Composites LLC.