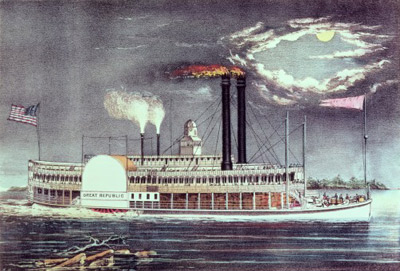 Steam-powered boats like the one in "Moonlight on the Mississippi" soon replaced vessels driven by sails or manpower.
American School/­The Bridgeman Art Library/Getty Images

Just as steam revolutionized land transportation with the invention of the locomotive, it also became the dominant power source on water -- replacing manual oars and sails. The early development of the steamship closely parallels that of the steam locomotive and the steam engine itself. In the late 1600s, Denis Papin, innovator of the steam piston and pressure cooker, theorized the use of steam-driven impellers to power a boat.

However, it was 1763 before Jonathan Hull was granted the first steamship patent for a tug boat for port use that used Savory's Engine to power a water wheel. Unfortunately for Hull, both Savory's Engine and the Newcomen engine were unable to produce sufficient horsepower. It was only after James Watt's contributions to steam technology that early steamboats became feasible.

British and French inventors (including steam locomotive pioneer Richard Trevithick) worked on the concept but created only slow, cumbersome vessels. But during the same time period, Robert Fulton successfully tested a prototype steam boat for river use. In 1807, he launched the Clermont, a paddle-wheel boat that soon proved capable of transporting passengers and cargo miles up and down stream. The success spread to Europe, where in 1812, British engineer William Symington débuted the Charlotte Dundas, the first successful steam-powered passenger boat.

When it came to ocean travel, ships outfitted with sails were given auxiliary steam power to use when wind power was insufficient. One such vessel, "Savannah," became the first steam-powered ship to cross the Atlantic in 1819.

Steam power quickly replaced sails. By 1815, more than 40 steam vessels were operating out of Liverpool. By 1826, businessmen linked to the sail industry went so far as to send a petition for government intervention to protect their business. Steam power dominated naval transportation until the rise of diesel-powered engines in the second half of the 20th century.

In the next section, we'll look at the invention of the steam turbine and find out how it became an essential part of electrical generation.