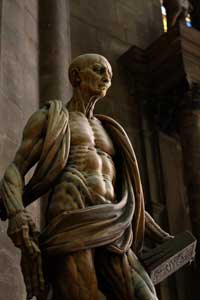 To understand suicide bombers, you have to understand the idea of martyrdom. Martyrs traditionally forsake their lives for a principle or faith. By valuing an idea more than their own existence, they elevate their cause.

A martyr's demise serves as a rallying point for his living compatriots and as an affront to tormentors. Tyrants tend to wield torture and death as the ultimate punishment for disobedience, but how can they cow a people who would sooner die than submit? How can they strike down opposing leaders without transforming them into even more powerful martyrs?

The history books are ripe with examples of martyrdom: individuals broken by blade and fire, subjected to unspeakable torments and elevated to the status of legend. While there is no shortage of secular martyrs, religion adds an additional dimension to sacrifice.

In Judeo-Christian tradition, the story of the fiery furnace shows just what can happen when you inject God into a tale of martyrdom. Recounted in the Book of Daniel, the story tells of how King Nebuchadnezzar gave Shadrach, Meshach and Abednego a choice: renounce their Jewish faith or perish in a blazing fire. The three youths refused to yield and were cast into the furnace -- only to miraculously emerge unscathed. The message was simple: God protects those who would die in his name.

Most martyrs don't benefit from such divine intervention. Still, the idea soon emerged among the Jews that dying in the name of God would yield rewards in the afterlife [source: Barlow]. In the face of religious persecution from Seleucid Emperor Antiochus IV Epiphanes (175-164 B.C.), beliefs changed to vindicate those butchered for their beliefs.

­The Seleucid emperor's brutality reached horrific proportions. Whole families chose to forfeit their lives rather than their faith. The story of the nine Maccabees serves as a prime example of this. A wife was forced to witness the brutal torture and execution of first her husband and then her seven sons. Both Book II Maccabees and IV Maccabees relate the fates of the Maccabeen martyrs, though the fourth book introduced a new element into the tale. When the torturers came to the last and youngest son, the child didn't just submit -- he leaped willfully into fire [source: Barlow].

Through martyrdom, the otherwise forbidden act of suicide attained a holy status.

A Note on Gender

While history has demonstrated that martyrs and suicide bombers may be men or women, we refer to the lone suicide bomber or martyr as he throughout for simplicity's sake.