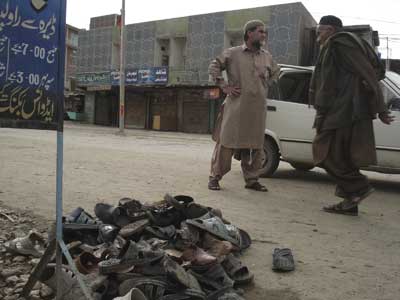 Residents of Dera Ismail Khan, Pakistan, walk past the slippers of those killed and injured in the Feb. 20, 2009, suicide bombing of a Shiite funeral procession.
­AP Photo/Ishtiaq Mehsud

­The Shiite funeral procession began like any other. Pakistani mourners carried the body of a slain Muslim cleric through the streets of Dera Ismail Khan. They grieved for another dead leader, another corpse bound for the grave -- a tale as old as civilization. Then another figure joined the procession, rushing to the very center of the crowd. The resulting blast ripped their solemn rite to bloody tatters.

Attacks such as this February 2009 incident have become a seemingly common occurrence in the world. Media images of the aftermath, for all the horror they evoke, are familiar: dead bodies in the street, scores of empty slippers among pools of creeping blood, traumatized survivors wailing at the sky or simply staring in silent shock. Thirty people died in the attack. Sixty more were injured [source: Mahshud].

­From a purely strategic standpoint, suicide bombings are chillingly logical. By concealing explosives on a willing carrier, a faction can smuggle death int­o densely populated areas or close to key targets. The precision of this delivery method surpasses even the most sophisticated missile guidance systems, allowing the will of a single individual to rival the technological arm of a superpower. How can anyone stop an adversary who has already forsaken everything for his or her cause?

Yet emotionally, the suicide bomber is often a hard pill to swallow. A man, woman or even a child gives up his or her life and, in doing so, drags down even more lives with them. Faced with such senseless carnage, we often write them off as brainwashed pawns and fanatical monsters.

­Despite all t­he misery and death they embody, suicide bombers are merely human and, far from being the product of a particular age or religion, their roots dive deep into the annals of history.