Birth of the Warrior Martyr 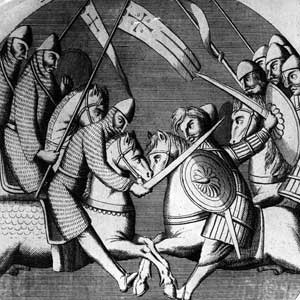 ­The idea that it's better to die by your own hand than suffer at the hands of an enemy gained ground among the ancient Jews. Rather than surrender to Roman authorities in A.D. 64, a rebel group under Eleazar ben Yair slayed every last man, woman and child among them by the sword. Ten chosen men performed the bloody task, and then one man killed his fellow nine. The sole survivor committed suicide, leaving 960 corpses for the Romans in the fortress of Masada [source: Jewish Virtual Library].

Around the same time, Christians were also raising the ire of their Roman overlords. Empowered by the story of Jesus' martyrdom, thousands of followers refused to renounce their faith. Instead, they gave themselves up to execution. According to their beliefs, they achieved immortality in the afterlife for their sacrifice, and many live on today as legendary icons.

In both Judaism and Christianity, we see examples of laying down one's life rather than submitting to an enemy. In the stories of the nine Maccabees and the fall of Masada, suicide even emerges as a noble act. But what of killing in the name of God?

Just as Islam arose in the seventh century from the traditions of Judaism and Christianity, so too did it elaborate on the struggle faced by the faithful: jihad. The term has two connotations in Arabic: an inward struggle of the soul and a righteous battle in the physical world. While critics of Islam often overlook the former, the latter became an essential aspect of the faith early on.

Islamic belief holds that Muhammad received his first holy vision in A.D. 610. By 624, the prophet and his followers were already fighting for their lives. That year, they scored their first major military victory, defeating the powerful Qurayshi army of Mecca at the Battle of Badr.

In the ensuing years, the followers of Allah would carve a place for themselves out of the war-torn region. Not surprisingly, the Quran vindicated defense combat in the name of protecting the faithful, as well as retaliation: "And kill them whenever you find them, and drive them out from where they drove you out … and fight not with them at the Sacred Mosque until they fight with you in it, so if they fight you (in it), slay them" (Surrah 2:191).

"Such," the verse concludes, "is the recompense of the disbelievers."