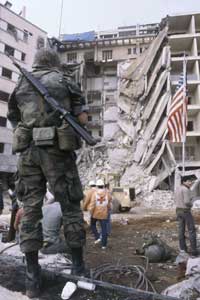 A U.S. Marine stands guard as rescue workers search the rubble of the U.S. embassy in Beirut for bodies following the 1983 suicide attack.
AP Photo/Bill Foley

Jihad washed across the Middle East up until the eighth century. In 1095, European Christians launched their own version of sanctified warfare in the form of the Crusades, a military conquest of the Holy Lands. Jews, Christians and Muslims all developed a way to reverse death through concepts of afterlife and rebirth. To this day, there is little violence that can't be justified with the right holy scriptures.

Such faith, when combined with sufficient will, can prove an effective weapon for those who wield it. Yet there's only so much a willing warrior martyr can accomplish with a sword or dagger. Outside of traditional army service, this restricted the use of such holy warriors to the role of assassin. In fact, the term itself comes from the Persian word Hashishin, the name of a medieval radical Shiite sect. The work of the Hashishin, or Assassins, was the public murder of influential leaders -- true suicide missions.

The Assassins used their martyr tactics to pursue political ends, spreading terror and awe through the crowds who bore witness to their attacks. The sect was eventually wiped out by the invading Mongol hordes in 1257, but its legacy would continue centuries later.

The development of gunpowder made it possible for martyrs to yield even greater results. Japanese kamikaze pilots used suicide tactics during World War II. Inspired by dedication to their emperor and their traditional code of honor, they crashed explosive-laden planes directly into enemy ships.

­The first known modern suicide bombing attack occurred in Lebanon in 1981 during a civil war between Christian and Muslim militants [source: PBS]. A lone Shiite suicide bomber struck the Iraqi embassy in Beirut. The United States entered the conflict the following year, leading to accusations of Christian bias from Muslims in the region. In 1983, a suicide bomber drove a truck full of explosives into the city's U.S. embassy, killing 63 people [source: Daragahi].

­Many historians point to these incidents a­s the birth of the modern suicide bomber. In the decades to follow, the world would see the rise of such tactics throughout the Middle East, India, ]Sri Lanka, Chechnya and the United States.

The Persian word­ Hashishin derives from the Assassins' alleged ritual use of hashish, a potent form of cannabis.