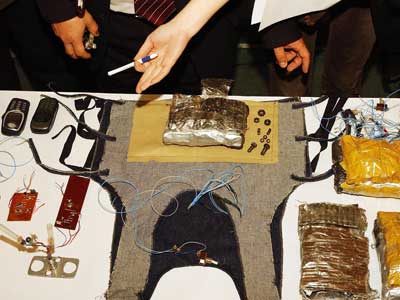 ­Recruitment and training costs aside, a suicide bomber generally carries a price tag of around $150 [source: Hoffman]. Considering the range and adaptability this form of attack offers, you can see the advantage it has over even high-tech weaponry. A properly trained and equipped suicide bomber can walk into sensitive areas and even alter plans at the last minute, depending on security and crowd sizes.

The quantity of explosives used in a suicide attack range from what you can strap to your person to what you can load into a vehicle. The terrorist attacks of Sept. 11, 2001, demonstrated how a highly successful suicide attack could weaponize commercial aircraft. For the individual, however, two basic methods of suicide bombing exist.

One approach is to fill a duffel bag with explosives and iron shrapnel, which adds to the bomb's lethality. The explosives are typically wired through a couple of batteries and up the pants leg to a simple trigger device, usually hidden in a pocket. Once the suicide bomber is in place, he has only to flip the switch. The duffel bag tactic has become less prevalent over time, given the added suspicion that the luggage can introduce.

The other method involves the use of a special belt or vest worn under the suicide bomber's clothing. The pockets of these garments contain explosives and bits of shrapnel, though everything from the bomber's wristwatch to his bones essentially becomes shrapnel with this tactic. The explosives connect to a detonator, which in turn connects to a pocket trigger. A handler often accompanies a suicide bomber to the proposed scene of an attack. In addition to guiding and encouraging the attacker, the handler also sometimes triggers the explosion remotely by use of a cell phone or other wireless device.

­The exact explosives used vary, depending on what's available. Some of the earliest bombs used against Israelis were made from smuggled Egyptian ­land mines [source: MacFarquhar]. As terrorist technology evolves, authorities fear the use of even more advanced explosives, as well as chemical attacks.