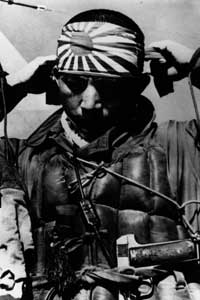 A Japanese kamikaze pilot ties on his honorary ribbon before departing on his suicide mission.
Keystone/Hulton Archive/Getty Images

The modern world is in its third decade of suicide bombings, and there seems to be no end in sight. This leads to the inevitable question: Does the tactic work? Or is it, like so many terrorist acts, an exercise in futility -- a violent revenge drama carried out in an unwinnable war? To learn more about the history of terrorism and the philosophy behind it, read How Terrorism Works.

On one hand, frequent suicide bombings help to meet the more immediate ends of terrorism. While a single attack probably won't drive out an occupying force or bring about political or cultural change, it can spread fear and attract attention to a terrorist organization's message. And in some cases, the groups behind terrorist attacks have made substantial victory claims.

Take Lebanon, where the first modern suicide bombings took place. U.S. troops entered the country in 1982 to help stabilize the region, but pulled out in 1984 following several deadly suicide attacks against U.S. and French embassies. In his memoirs, then President Ronald Reagan attributed the decision to the loss of 241 Marines in a suicide truck bombing [source: ­Barlow].

­­Japanese kamikaze tactics led to a different decision from U.S. forces in World War II. Believing that the Japanese inclination for martyrdom would make a land war on the island nation too costly, the ­United States instead dropped atomic bombs on the densely populated cities of Hiroshima and Nagasaki.

­Suicide attacks can not only embolden your enemy, but also make it easier for your adversary to dehumanize you -- which in turn makes the choice to employ deadlier tactics even easier. Such escalations can lead to unending conflicts and wars of extermination.