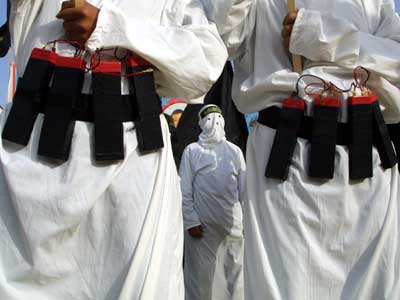 ­While we continue to search for ways to stop such cycles of violence, scientists and law enforcement professionals work toward the prevention of attacks. With the use of various chemical detectors and radar scanners, we can identify explosive materials and electronic devices, but high costs generally prevent their widespread usage. Likewise, increased human security and checkpoints can only spread so far.

Stricter law enforcement and racial profiling create additional problems. In 2005, London police were heavily criticized for using lethal force against a suspected suicide bomber. Seven gunshots to the head later, they realized the suspect was an innocent man of Brazilian descent. While killing a suicide bomber before he can pull the trigger follows a cold sort of logic, it doesn't leave much room for the checks and balances most free societies demand of their governments.

Alarmingly enough, advance warning might actually lead to more deaths, according to a National Research Council report. If a dense crowd had time to flee from a detonating suicide bomber, they could decrease the human shield surrounding the blast. More fragments could potentially harm even more people in a wider blast radius.

Israeli settlers have proposed burying dead suicide bombers in pigskin body bags to deter Islamic suicide attacks. The theory behind this tactic is that sufficient defilement of a dead martyr would effectively cancel out the one-way ticket to paradise that holy martyrdom ensures -- or at least convince would-be bombers that this is the case [source: Philips]. The problem with this notion of prevention, in addition to further emboldening an enemy through atrocity, is that it depends on a simple understanding of martyrdom ideology. Religious faith is not the primary motivation behind every terrorist, and if anyone is going to shake terrorist faith in the fruits of martyrdom, you can bet it's not going to be a dehumanized adversary who defiles dead compatriots.

Explosives have made martyrdom a potent weapon for terrorists around the globe -- a threat based in a tangled web of belief, politics, history and science. Whether the tactic truly "works" or not is debatable, but it certainly endures.

­Explore the links below to learn even more about terrorism, explosives and the history of human conflict.