Life Cycle of a Giant Star 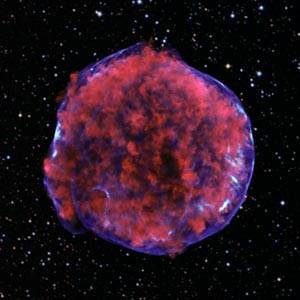 This is the remnant of the supernova Tycho Brahe observed in 1572. The image is a colorized composite of low-energy x-rays (red) showing debris and high-energy x-rays (blue) showing the blast wave, plus the visible field of stars around it.
NASA/CXC/Rutgers/K. Eriksen et al.

A giant star starts its life innocently, when gas and dust buckle under an assertive gravitational pull to form a baby star.

As the material at the center of a fledgling star heats, it attracts more interstellar gas and dust. This growth phase can take up to 50 million years, followed by another 10 billion years of shiny adulthood. What's the source of all that twinkling? Stars are fueled by the nuclear fusion of hydrogen into the slightly denser and heavier element helium. The fusion takes place in the star's core, and the energy it produces flows outward, creating the star's observable glow and preventing the heavy core from collapsing in on itself [source: NASA]. You can read more about the process in How Stars Work.

When a star starts running out of hydrogen to fuse into helium, it's the beginning of the end. With less energy radiating outward, the core begins to collapse, causing its temperature to spike. Hydrogen fusion continues only in the star's outer layers, which causes it to expand. It becomes a red giant.

A red giant will lose its outer layers to become a white dwarf. (If it's massive enough, the star will consume those layers by fusing them into heavier and heavier elements. If the star doesn't have enough gravity to do that, it will release its cooling outer layers into space.) A white dwarf with enough mass will eventually go supernova. Its core will collapse, resulting in an explosion that can't compare to any we might experience on Earth -- unless we were to bundle a few octillion nuclear warheads and detonate them all at the same time [source: Thompson, NASA]. Since that scenario is unlikely, we'll never experience a supernova-sized explosion -- despite sci-fi movie plots like "The Book of Eli," our sun isn't big enough to go out with such a bang.

Why such destructive collapses occur, what happens afterward and how a supernova will affect the rest of its galaxy all depend on several factors that we'll discuss on the next page.