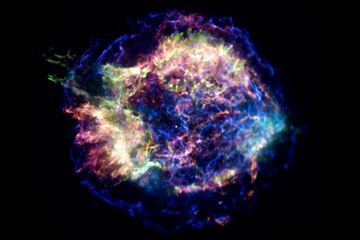 This is Cassiopeia A, a core collapse supernova remnant with a neutron star in its center. Located in the Milky Way only some 11,000 light-years away from Earth, it originally exploded about 330 years ago.
NASA/CXC/UNAM/Ioffe/D. Page, P. Shternin et al

Type Ib, Type Ic and Type II supernovae stars start out so huge -- possibly 8 times the size of our sun -- that they cannibalize themselves to the point of collapse [source: NASA]. A white dwarf eventually created from a star that massive has so much heat and pressure inside its core that lighter elements keep fusing into increasingly heavy elements instead of flying off into space. This produces enough radiating energy to support the star's increasing weight -- until iron forms. The fusion of iron into heavier elements actually uses energy rather than giving it off, so when iron begins to fuse, the star's outer layers lose their support and begin to fall inward [source: Nave]. To understand the huge explosion that results, you have to know what's going on with the star's tiniest particles.

If a white dwarf is massive enough to fuse the iron in its core, those iron atoms are incredibly hot and densely packed, squashed together like sweaty clowns stuck in a circus car. Their subatomic particles collide, and the iron atoms' nuclei split, leaving behind helium nuclei plus a few leftover neutrons and absorbing a lot of energy in the process.

Without that energy left to hold it up, the star's core starts shrinking rapidly. It goes from a diameter of some 5,000 miles (8,000 kilometers) to about 12 miles (19 kilometers) suddenly, creating temperatures somewhere in the region of 180 billion degrees Fahrenheit (100 billion degrees Celsius) [source: NASA]. That heat causes protons and electrons to fuse together, canceling each other out to become neutrons and expelling a bunch of neutrinos in the process. The neutrinos can escape, so they do, leaving the core with even less energy to hold itself up. The core contracts as much as it physically can, but star's outer layers keep falling inward, even after there's no more room. That's when they rebound in an enormous explosion.

All of that took a lot of words to explain, but it may happen in as little as a quarter of a second.

The explosion is hot enough to fuse elements far heavier than iron, and it releases these elements in a gaseous cloud that will become an asymmetrical remnant around the remaining, solid core [source: Chandra X-ray Observatory].

On the next page, we'll share more about what the destruction of a star can create.