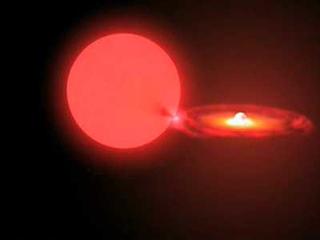 In this image, a white dwarf's strong gravitational pull siphons matter from a nearby star. If the white dwarf becomes too massive to support its own weight, it will collapse on itself and then explode in a supernova.
NASA

Humans are born, then we grow and die. Our life cycles are basically the same as those of the massive stars twinkling in the night sky -- if we exploded in a blaze of glory at the end of our time, that is.

When the cosmos' most colossal stars go out with a bang, the immense interstellar explosion is known as a supernova. While smaller stars simply fizzle out, the death of an astronomical heavyweight is a showstopper. It has spent its life cannibalizing its own innards -- and sometimes the innards of a solar neighbor -- for fuel. When there is nothing left for it to consume, it collapses in on itself and then explodes outward in a death knell that outshines other huge stars -- and sometimes entire galaxies -- for days, weeks or even months [source: Lemonick].

A supernova should, statistically, detonate once every 50 years or so in a galaxy the size of our Milky Way. However, until 2006, scientists believed the Milky Way's most recent supernova occurred in the late 1600s [source: Goddard Space Flight Center]. They then realized that a clump of interstellar debris they'd been tracking for 23 years was actually the remnants of a supernova just 140 years old [source: NASA]. Astronomers couldn't view the flare-up because of cosmic dust, which also blocks most of the 1 billion supernovae estimated to occur outside our galaxy every year [source: Odenwald].

In contrast, some supernovae are so bright that they can be seen with a simple set of binoculars. In September 2011, earthlings in the northern hemisphere could peer into the Pinwheel Galaxy -- which appears above the Big Dipper's handle but isn't visible from most of the southern hemisphere -- and see a supernova that detonated 21 million years ago [source: Perlman].

So how do you spot one? Identifying a new point of light as a supernova (as opposed to a high-flying aircraft or a comet) may be easier than you think.