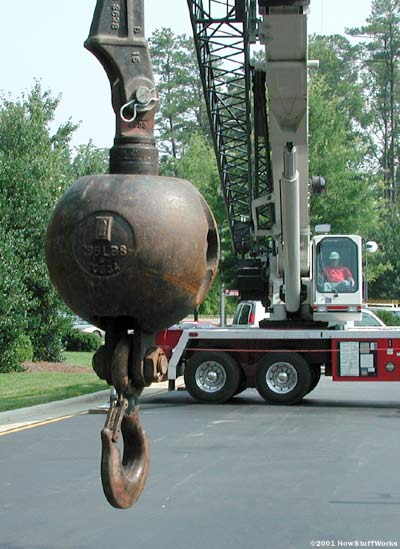 ­Heavy rains spawned by Hurricane Danny flooded ­many parts of Charlotte, N.C. Floodwaters rose so quickly in Little Sugar Creek that the underpinnings of a train trestle collapsed, bringing a diesel locomotive crashing down into the creek. As you might imagine, a 412,000-pound (186,880-kilogram) locomotive is not eas­ily lifted. After the waters receded, emergency teams brought in three large hydraulic truck cranes -- one 500-ton, one 300-ton and one 175-ton -- to lift the train out of the creek bed and back onto the train tracks.

Hydraulic cranes may be simple by design but they can perform Herculean tasks that would otherwise seem impossible. In a matter of minutes, these machines are able to raise multiton bridge beams on highways and heavy equipment in factories and even lift beachfront houses onto pilings. Hydraulic truck cranes are also used to lift killer whales like Shamu out of water tanks when places like SeaWorld ship the whales to new destinations.

Climb into the cab and we'll show you just how these machines are operated.

If you've read How Hydraulic Machines Work, you know that the hydraulic crane is based on a simple concept -- the transmission of forces from point to point through a fluid. Most hydraulic machines use some sort of incompressible fluid, a fluid that is at its maximum density. Oil is the most commonly used incompressible fluid for hydraulic machines, including hydraulic cranes. In a simple hydraulic system, when a piston pushes down on the oil, the oil transmits all of the original force to another piston, which is driven up.

Most hydraulic truck cranes use two-gear pumps that have a pair of inter-meshing gears to pressurize the hydraulic oil. When pressure needs to increase, the operator pushes the foot throttle to run the pump faster. In a gear pump, the only way to get high pressure is to run the engine at full power.

A 70-ton hydraulic truck crane uses a 12.7-L diesel engine that generates up to 365 horsepower. The engine is connected to three two-gear pumps, including:

Some basic equipment on a hydraulic truck crane: 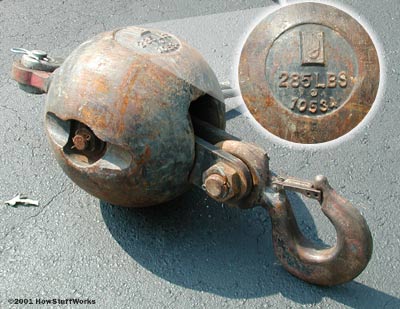 The large metal ball attached to the hook keeps the cable taut when there is no load on the hook.

The most recognizable part of any crane is the boom. This is the steel arm of the crane that holds the load. Rising up from just behind the operator's cab, the boom is the essential piece of a crane, allowing the machine to raise loads to heights of several dozen feet.

Mouseover the parts of the hydraulic crane for descriptions.

Reinforced-steel cable lines run from a winch just behind the operator's cab, extending up and over the the boom and jib. Each line is capable of holding a maximum load of 14,000 pounds (6,350 kilograms). So, a 70-ton hydraulic truck can use up to 10 cable lines for a total of 140,000 pounds (63,503 kilograms), or 70 tons. The lines run up the boom and jib and attach to a 285-pound (129 kilograms) metal ball that keeps the lines pulled taut when no load is attached to the hook.

To maneuver the load, the boom has to be able to move right and left, as well as up and down. Underneath the operator's cab is a Rotex gear on a turntable bearing that turns at 2 revolutions per minute (rpm). It is driven by a bidirectional, hydraulic motor mounted on the cab and housed in a metal cover to prevent injuries. The rotation is controlled by a foot-operated, hydraulic pedal in the cab.

The large gear under the cab is the Rotex gear, which allows the cab to swivel and move the boom from side to side.

Hydraulic truck cranes are used to lift heavy loads to tall heights, and it's important that the truck be completely stable during the lifting operation. The tires don't offer the stability needed, so the truck employs outriggers that act as balances to keep the crane from leaning too much to one side or the other. The outriggers use hydraulics to lift the entire truck, tires and all, off the ground. The outriggers are comprised of the beam, which is the leg of the outrigger, and the pad, which is the foot. Sometimes, "floats" are placed under the pad to dissipate the force of the crane and the load over concrete or pavement. Floats are usually wood planks that are lined up to create a base that is larger than the pad itself.

The outriggers keep the crane balanced during a lift. The inset shows all outriggers extended. 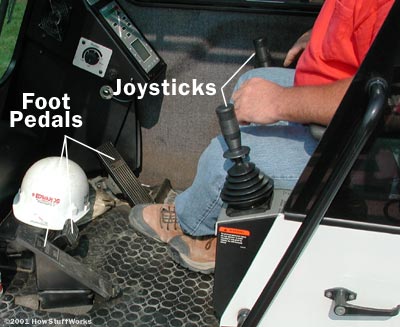 The crane is operated by hydraulic joysticks and foot pedals.

In the previous two sections, you learned how the hydraulics and other pieces of equipment on the hydraulic truck crane work. All of this equipment is controlled by the operator inside the cab, which is located on top of the deck. Crane operators use several control mechanisms to raise and lower the boom, rotate the cab and boom, wind and unwind the winch and control other peripheral equipment.

The 70-ton Link-Belt hydraulic truck crane has two basic types of controls for maneuvering a load:

Prior to any lift, the operator enters data into a computer inside the cab, including the weight of the object to be lifted and the height to which it is to be lifted. This computer serves as the operator's backup, warning the operator if the crane is being pushed beyond its capability. Using a binder of charts in the cab, the operator also determines the angle of lift and the radius of the boom. Once all of this is entered, the computer can track the progress of the lift and warn the driver if the crane is nearing its limitations. If the boom is lifted too high for the load amount, a series of lights just above the inside of the front window will begin to light up. These lights are the warning lights for the Load Moment Indicator (LMI).

If the operator tries to lift a load too high, the Load Moment Indicator will light up.

There are at least two other people needed to perform a lift properly, including the oiler and the signalman. The oiler is responsible for making sure that all of the crane's parts are in place and secured prior to any lift. He or she also acts as a spotter during a lift to ensure that the lift is being performed properly. The signalman, as the name suggests, gives hand signals to the operator during the lift to make sure the load is being maneuvered correctly. Click here to see some of the hand signals used during a lift.

Hydraulic truck cranes provide brute strength to move objects, machines and even large animals that would otherwise be very difficult to budge. Using a very simple principle of hydraulics, these machines move thousands of pounds with relative ease, making them an essential component of most construction projects and a great example of the power of basic physics.

For more information on hydraulic cranes and related topics, check out the links on the next page.

Special thanks to Edwards Crane, Inc. for its help with this article.