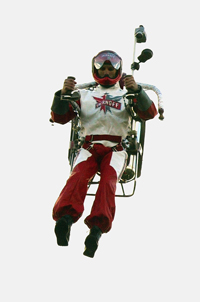 A handful of companies currently offer jet packs for sale to the public. JetPack International (Jet PI) is an American company founded by Troy Widgery, creator of Go Fast energy drinks. Jet PI took 50s-era rocket belt designs and updated them with modern fuels and materials. These efforts reduced weight, improved thrust and increased flight time to just over 30 seconds. In addition to public demonstrations, Jet PI offers some of their rocket belts and jet packs for sale. Their T-73 model is a true jet pack, with a claimed flight time of nine minutes and a sale price of $200,000. They formerly offered a rocket belt for sale for $150,000.

­T­ecnologia Aeroespacial Mexicana (TAM) is a Mexican company that offers a range of rocket-powered products, including the TAM Rocket Belt. The cost is $125,000. Both Jet PI and TAM include a training period in the purchase price. TAM says they include hands-on training and 10 test flights, along with set-up, maintenance and 24/7 technical support.

Extensive training is a really good idea -- jet packs and rocket belts can be very dangerous. There are no reported serious injuries or fatalities as a result of jet pack use, but that probably has a lot to do with how rare they are. In most flights, the pilot is actually tethered to the ground, preventing loss of control. There are no back-up safety systems because the limited flight time of a rocket belt means the pilot will never get high enough off the ground to successfully use a parachute. Flying is very difficult -- the pilot has to navigate in three dimensions, and a human wearing a rocket is not a very stable flight platform. For these same reasons, it's not a good idea to try to build your own rocket belt or jet pack. In fact, the television show MythBusters examined plans for a homemade jet pack available on the Internet. Using high-powered fans, this device was supposed to provide lift via air thrust. The MythBusters team proved that that the plans were not viable.

Would you like to find out more about jet packs, rocket belts and other personal aircraft? Then check out the links below, they'll provide you with plenty of great information.

Affordable, personal jet packs are probably never going to happen. What other individual flying devices could we use? Well, there's the Trek Aerospace Springtail, which has a much longer range (more than 150 miles) and flight time (more than 2 hours) and uses ducted fans to provide lift. Tecnologia Aeroespacial Mexicana (TAM) has also released designs for a hybrid rocket/helicopter pack, called the TAM Libelula micro helicopter. A helicopter prop mounted above the pilot's head would provide prolonged flight time. And a company called AirBuoyant is developing the VertiPod, a two-person flying platform that uses a prop to provide air thrust.