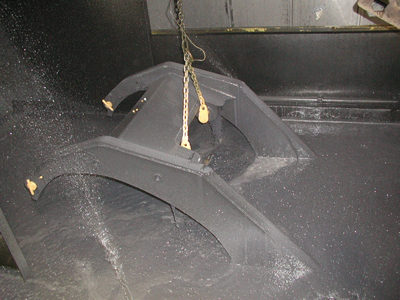 Caterpillar takes every bit as much care in the building of loaders as it does in the building of the much larger, more expensive machines it manufactures. Great measures are taken to ensure that the loaders leaving the assembly line meet the high expectations of Caterpillar's customers:

All of the metal parts, including the frame, roll cage, loader arms, buckets and most brackets on the machine, are sent though this process, which starts with a thorough cleaning. The parts are then coated with zinc phosphate and sealed with a chrome sealant. This gives them a base layer of protection in case the paint and electrocoat are scratched.

After the electrocoat is cured, any of the parts that are going to be exposed to sunlight are painted in a spray booth. This multi-layer protection makes the parts rust resistant -- so resistant that if a scratch were to penetrate all of the coatings down to the bare metal, the zinc phosphate would keep any rust from spreading.

Caterpillar tests the loaders during the manufacturing process. For instance, they test for leaks in the hydraulic systems before the body is attached to the frame of the machine.

If a problem is found at this point, it's much easier to fix than after the machine is fully assembled.

A lot of construction machinery is assembled using air-powered impact wrenches (like the ones you see your mechanic using). These wrenches are notoriously inaccurate (plus or minus 10 percent, at best) at controlling the torque on a bolt or nut.

Getting the correct torque on the nuts and bolts is important. The torque is used as an indicator for how much the bolt stretches. For a good joint, the bolt has to stretch a little (this is what gives it its clamping force). A bolt with too little stretch won't hold the parts on tightly, and could even work loose over time. A bolt with too much stretch could break during installation, or be weakened during installation and break later.

The Caterpillar assembly line uses all electronically controlled wrenches. These wrenches can control the torque on the bolts to within 2 percent, ensuring a more accurate amount of bolt-stretch.

Some joints are so critical to the machine that an even more advanced technique is used. For instance, on the skid steer loader, the lug nuts that hold the wheels on are tightened by a special, electronically controlled tool that uses the torque-turn method. This tool tightens the nuts until a threshold torque is reached, and then it turns them a fixed amount -- maybe one more revolution. This enables even more accurate control of the bolt stretch.