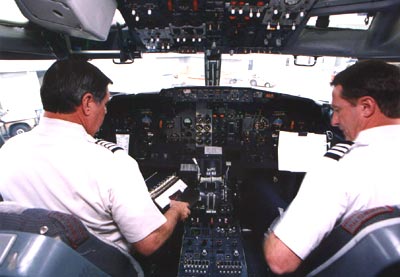 You wouldn't get very far on a flight without pilots: They're the people who put all that sophisticated equipment to work. On commercial airlines, there are always at least two pilots, and on many flights, there are three. All airline pilots have had extensive training and flying experience, often as part of military service. The road from the first training flight to the airline cockpit is a long and difficult one, but for many pilots, this is the only way to go. To learn more about this career path, check out How Becoming an Airline Pilot Works.

On an airliner, the pilot in command is called the captain. The captain, who generally sits on the left side of the cockpit, is ultimately responsible for everything that happens on the flight. This includes making major command decisions, leading the crew team, managing emergencies and handling particularly troublesome passengers. The captain also flies the plane for much of the trip, but generally trades off with the first officer at some point.

The first officer, the second in command, sits on the right side of the cockpit. He or she has all of the same controls as the captain, and has had the same level of training. The primary reason for having two pilots on every flight is safety. Obviously, if something happens to the captain, a plane must have another pilot who can step in. Additionally, the first officer provides a second opinion on piloting decisions, keeping pilot error to a minimum.

Most airliners built before 1980 have a cockpit position for a flight engineer, also called the second officer. Typically, flight engineers are fully trained pilots, but on an ordinary trip, they don't fly the plane. Instead, they monitor the airplane's instruments and calculate figures such as ideal takeoff and landing speed, power settings and fuel management. In newer airliners, most of this work is done by computerized systems, eliminating the need for the flight-engineer position. In the future, it will be phased out entirely.

All three pilots in the flight crew have equal levels of training, but they usually have varying degrees of seniority. At most airlines, the career track is based almost completely on length of service. To become a captain, you have to rise through the ranks and wait until it's your turn and a position opens up. Seniority also dictates the sorts of planes a pilot flies, as well as his or her schedule. Pilots who are relatively new to the airline will fly reserve, meaning they do not have a set flying schedule. A reserve pilot may have "on call" duty for 12 hours or longer at a stretch. In this time, the pilot has to be packed and ready to fly, because the flight scheduler might page them at any moment. If a pilot is called in, he or she reports to the airport immediately for a flight assignment (for many airlines, the pilot must be ready to go within an hour of being paged). Reserve pilots are called up when the scheduled pilot becomes ill or can't make the flight for some other reason. The life of the reserve pilot is largely unpredictable: Pilots might spend several days on reserve and never get paged, or they might get paged every day. And when they report for duty, they could be flying over to the next state or they might be putting in a three-day trip to another part of the world. With this hectic schedule, it's no wonder flights are occasionally delayed while waiting around for crew members to arrive.

Pilots with more seniority pick out a regular flight schedule, called a line. Pilots holding a line live a more "ordinary" sort of life, in the sense that they know ahead of time when they'll be working. But even these pilots spend a lot of time away from their families, and they never know what delays they'll encounter. In the United States, a pilot's scheduled flight time should not exceed 8 hours in a row for domestic flights or 12 hours for international flights. In actuality, however, pilots may work for more than 16 hours straight, since flights are often delayed or extended.

A pilot typically arrives at the airport at least an hour before departure (two hours for international flights). Most airlines have a computerized check-in system in the pilot's lounge. This gives the pilots the details of the flight, including the weather, the number of passengers on board and the other crew members who will be working. In order to keep everything in one place, pilots generally keep their flight papers and any other information in a large briefcase.

In the time before take-off, a pilot reviews this information, works out the flight plan, files it with air traffic control and meets with the rest of the crew. Once the airplane has landed, the captain meets with the arriving flight crew to find out if they experienced any irregularities. The first officer performs a general inspection of the plane to make sure everything is in good order. After this walk-through, the pilots meet in the cockpit and make sure all of the instruments and controls are working properly.

Before takeoff, the captain must sign the flight release, a document attesting that the crew is fit and that the pilots have reviewed the flight information. While they're preparing for takeoff, the pilots will receive an up-to-date weather report and passenger count and a pre-departure clearance form. To make the paperwork easier, many cockpits are equipped with a built-in printer that receives information from the gate agents and the control tower.

When the paperwork is finished, the attendants secure all the doors and the captain gives the go-ahead for push back (pushing the plane back from the gate so it can move onto the runway). Then, the pilots simply wait their turn and follow the air traffic controller's instructions for takeoff.

In an uneventful flight, takeoff and landing require the most intensive piloting. In modern airliners, the pilot's main responsibilities are to monitor the automatic systems to make sure the plane is flying correctly and to alter the course as needed. In an emergency, of course, things can get a lot more hectic. All airline pilots have extensive training in dealing with the unexpected and keeping a cool head in precarious situations. Fortunately, it is only on rare occasions that pilots have to put this training to work, but they must be ready to leap into action at all times.

Language of the Skies

Pilots fly all over the world, and to do their job correctly, they must communicate with local air traffic controllers wherever they go. The only way for the system to work properly is if everybody involved can speak the same language.

International treaties have designated English as the official language for airplane communication, though airports may use another language if both the pilot and the controller can speak it. The controllers must speak in English if the flight crew is not comfortable speaking the native language.

Unfortunately, many pilots only learn enough English to get by, leading to occasional misunderstandings. It's not clear how many accidents and incidents are the result of language barriers, but some studies show that the problem is getting worse.