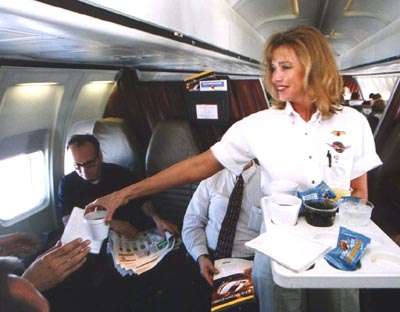 On a commercial flight in the United States, there must be one flight attendant for every 50 passengers. These attendants have a variety of responsibilities in their work, which begins before the first passenger boards and continues through the entire flight. Before boarding, the whole crew meets, the captain reviews the flight schedule and any safety concerns, and the lead attendant assigns each attendant to a particular section of the plane. Before the plane takes off, the attendants must:

After they have worked through this checklist, flight attendants strap themselves into their jump seats. Once the plane levels off, the attendants prepare food and drinks, load the refreshment and meal carts, and serve the passengers.

Additionally, attendants must make sure that all passengers adhere to the safety guidelines, and they have to deal with any emergency situations that come up. If there is a problem with the plane, the crew must keep the passengers calm and help them exit the aircraft if necessary. Attendants must also be prepared to deal with terrorists, irate passengers and various medical emergencies. In situations where most people would be paralyzed with panic, flight attendants have to keep their wits about them and work through the emergency.

To deal with all of these duties, a flight attendant must possess certain abilities and personality traits. Airlines look for friendly people who can memorize a lot of information and keep a cool head under pressure. To get a position with an airline, potential flight attendants must interview for the job, pass a medical exam, and work their way through a rigorous schedule of instruction and performance reviews. During the training period, which can last between three and nine weeks, a potential attendant lives with other candidates at a hotel or dorm facility, where they attend classes on everything from food service to dealing with armed hijackers. At this time, the candidates may receive a weekly allowance for expenses, but they aren't actually considered airline employees. They are not hired officially until after they complete the entire training course and pass all tests. To find out how you can become an airline flight attendant, check out this site.

There are many more flight-attendant applicants than there are flight-attendant positions, so only a select few make it through the entire process and get hired by the airline. The position is competitive primarily because of the unique benefits it offers. In most airlines, flight attendants can fly domestically and internationally at minimal cost (as little as $5 for a domestic trip) as long as the plane has available seats. People are also attracted to flight-attendant work because it doesn't have a five-day, "9-to-5" schedule.

As with pilots, a flight attendant's work schedule is determined by seniority. Newer flight attendants have to fly reserve, rarely knowing where they will be headed the next day. They are at the mercy of the crew-schedulers -- the airline employees who figure out who needs to be where on a day-to-day basis. After a year, or in some cases many years, attendants may hold their own line, maintaining a regular, set schedule.

The world of flight attendants and pilots has changed considerably since the beginning of commercial aviation. In the next section, we'll see how early airline crews differed from the ones that fly today.