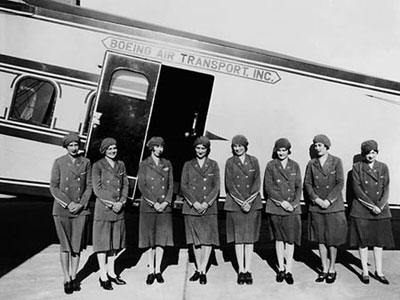 Since the very first airplanes, pilots have been the stars of the aviation world, though their role has evolved considerably over the years. The major developments in the world of pilots have been due to new equipment and changing training standards. When airplanes were first invented, they had a relatively simple control system and were often piloted by the designers themselves. Flying was a difficult skill, but since absolutely everybody was an amateur, the only way to pick it up was by trial and error.

As airplane technology advanced, more and more training was required. Automated systems and sophisticated instruments did a lot of the flying work for the pilot, but the pilot also had to understand what everything did. If you've read How Becoming an Airplane Pilot Works, you know that pilots have to go through a lot of work before they can fly for the major airlines.

In the 1920s, the U.S. began regulating both aircraft design and pilot training, and the only practical way to meet airline standards was to have extensive military flying experience. In the 1930s through the 1960s, the vast majority of airline pilots in the United States were white men with some military background. Today, there are more and more women and minority pilots, and roughly half of all current U.S. airline pilots were never in the military.

The world of flight attendants has also changed significantly since the beginning of commercial air travel. The first airliners were actually mail planes with a few extra spaces for passengers. On these flights, you had to take care of yourself: The plane crew included only pilots, and they were so busy flying the plane that they didn't have time to attend to passengers.

Eventually, some early airlines added cabin boys to their flights. These crew members, who were usually teenagers or small men, were mainly on board to load luggage, reassure nervous passengers and help people get around the plane. In 1930, a young nurse named Ellen Church, along with Steve Stimpson of Boeing Air Transport, came up with a new sort of attendant. Church proposed that registered nurses would make an ideal addition to the flight crew, as they could take care of any passengers that got sick. Boeing, then an airline as well as a plane manufacturer, hired eight nurses for a three-month trial run. The new attendants, who would come to be called "stewardesses," soon became an integral part of the airline industry. In time, these attendants were no longer required to have a nursing degree, but the nurturing, maternal character remained a key element in the profession.

Until relatively recently, airline stewardesses were under strict control. They were not allowed to be married -- ostensibly because husbands would complain that the long hours kept their wives away from home -- and most airlines had certain constraints on their height, weight and proportions. Their clothing was similarly restrictive: At most airlines, stewardesses wore form-fitting uniforms and were required to wear white gloves and high heels throughout most of the flight. While it was a perfectly respectable occupation for young women, early stewardesses were generally underpaid, had minimal benefits and were in a subservient role to pilots.

During the 1960s, '70s and '80s, flight-attendant unions, as well as representatives from the equal rights movement, brought about sweeping changes in the airline industry that addressed these problems. Since the 1970s, the policy of the major airlines has been to hire both men and women as attendants and to have no restrictions on size and weight. Flight attendants now share many of the same benefits as pilots, and airlines recognize them as a crucial component of the air-travel industry. After all, to most passengers, the flight attendant is the face of the entire airline.

As the airline industry continues to expand to meet growing consumer demand, more and more young people are joining airline crews. To those workers who can stand the long hours and unpredictable lifestyle, there's nothing quite like flying through the air for a living.

To learn more about flight attendants, airline pilots, and the airline industry in general, check out the links below.