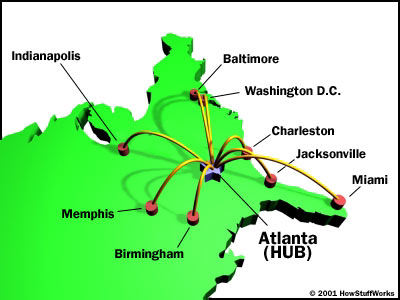 Atlanta is a hub that serves many other cities throughout the U.S. and around the world.

Most of the 12 major U.S. passenger airlines in operation as of 2001 use a hub-and-spoke network to route their plane traffic. The words "hub" and "spoke" create a pretty vivid image of how this system works. A hub is a central airport that flights are routed through, and spokes are the routes that planes take out of the hub airport. Most major airlines have multiple hubs. They claim that hubs allow them to offer more flights for passengers.

The hub-and-spoke system became the norm for most major airlines after the U.S. federal government deregulated the airlines in 1978. Under the direct-route, or point-to-point, system used prior to deregulation, airlines were forced by the federal government to fly directly between two small markets. This resulted in many flights that were routinely half empty, which resulted in airlines losing money. Today, most airlines have at least one central airport that their flights have to go through. From that hub, the spoke flights take passengers to select destinations.

A good example of a hub-and-spoke system is that of Delta Airlines, which has its hub at Hartsfield Atlanta International Airport. Let's say you are in Charleston, SC, and want to go to Memphis, TN. There's probably not a lot of demand for a Charleston-to-Memphis flight, so the airline flies you from Charleston to Atlanta, and then from Atlanta to Memphis via a connecting flight.

The purpose of the hub-and-spoke system is to save airlines money and give passengers better routes to destinations. Airplanes are an airline's most valuable commodity, and every flight has certain set costs. Each seat on the plane represents a portion of the total flight cost. For each seat that is filled by a passenger, an airline lowers its break-even price, which is the seat price at which an airline stops losing money and begins to show a profit on the flight.