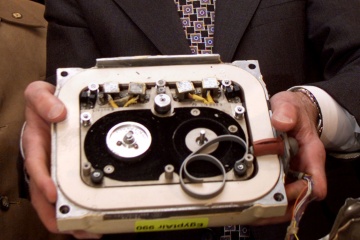 An older model flight data recorder from EgyptAir 990, which crashed in 1999.
©Reuters/CORBIS

The widespread use of aviation recorders didn't begin until the post-World War II era. Since then, the recording medium of black boxes has evolved in order to log much more information about an aircraft's operation.

Older black boxes used magnetic tape, a technology that was first introduced in the 1960s. Magnetic tape works like any tape recorder. The Mylar tape is pulled across an electromagnetic head, which leaves a bit of data on the tape. These days, black boxes use solid-state memory boards, which came along in the 1990s.

Solid-state recorders are considered much more reliable than their magnetic-tape counterparts. Solid state uses stacked arrays of memory chips, so they don't have moving parts. With no moving parts, there are fewer maintenance issues and a decreased chance of something breaking during a crash.

Data from both the CVR and FDR is stored on stacked memory boards inside the crash-survivable memory unit (CSMU). The memory boards have enough digital storage space to accommodate two hours of audio data for CVRs and 25 hours of flight data for FDRs.

For instance, in the Boeing 787, the units can log a whopping 146,000 parameters, resulting in several terabytes of data for every single flight. That incredible load of data is a double-edge sword; it's great for monitoring the aircraft, but it can overwhelm engineers and maintenance personnel. To manage all of that data, they need sophisticated data management software.

Whether the system is an older version or fully modern, all of the data collected by the airplane's sensors is sent to the flight-data acquisition unit (FDAU) at the front of the aircraft. This device often is found in the electronic equipment bay under the cockpit. The flight-data acquisition unit is the middle manager of the entire data-recording process. It takes the information from the sensors and sends it on to the black boxes.

Both black boxes are powered by one of two power generators that draw their power from the plane's engines. One generator is a 28-volt DC power source, and the other is a 115-volt, 400-hertz (Hz) AC power source.