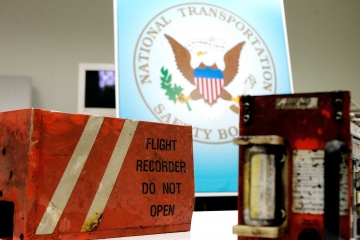 The cockpit voice recorder and the flight data recorder that were retrieved from Comair Flight 5191 in 2006.
Mark Wilson/Getty Images

In almost every commercial aircraft, there are several microphones built into the cockpit that listen to flight crew conversation. These microphones also track any ambient noise in the cockpit, such as switches being thrown or any knocks or thuds. There may be up to four microphones in the plane's cockpit, each connected to the cockpit voice recorder (CVR).

Microphones send audio to the CVR, which digitizes and stores the signals. In the cockpit, there is also a device called the associated control unit, which provides pre-amplification for audio going to the CVR. The four microphones are place in the pilot's headset, co-pilot's headset, headset of a third crew member (if there is a third crew member) and near the center of the cockpit, to pick up audio alerts and other sounds.