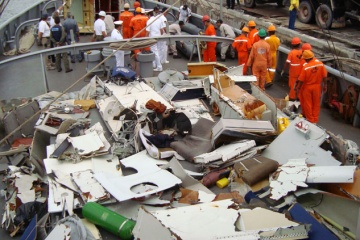 Although they are called "black boxes," aviation recorders are actually painted bright orange. This distinct color, along with the strips of reflective tape attached to the recorders' exteriors, help investigators locate the black boxes following an accident. These are especially helpful when a plane lands in the water. There are two possible origins of the term black box: Some believe it's because early recorders were painted black, while others think it refers to the charring that occurs in post-accident fires.

In addition to the paint and reflective tape, black boxes are equipped with an underwater locator beacon (ULB). If you look at the picture of a black box, you will almost always see a small, cylindrical object attached to one end of the device. While it doubles as a carrying handle, this cylinder is actually a beacon.

If a plane crashes into the water, the beacon sends out an ultrasonic pulse that cannot be heard by human ears but is readily detectable by sonar and acoustical locating equipment. There is a submergence sensor on the side of the beacon that looks like a bull's-eye. When water touches this sensor, the beacon is activated.

The beacon sends out pulses at 37.5 kilohertz (kHz) and can transmit sound as deep as 14,000 feet (4,267 meters). Once the beacon begins pinging, it pings once per second for 30 days. This beacon is powered by a battery that has a shelf life of six years. In rare instances, the beacon may get snapped off during a high-impact collision.

In the U.S. when investigators locate a black box, it's transported to the computer labs at the National Transportation Safety Board (NTSB). Special care is taken in transporting these devices in order to avoid any further damage to the recording medium. In cases of water accidents, recorders are placed in a cooler of water to keep them from drying out.