Browse the article What Are Chemtrails and Should You Be Scared of Them? 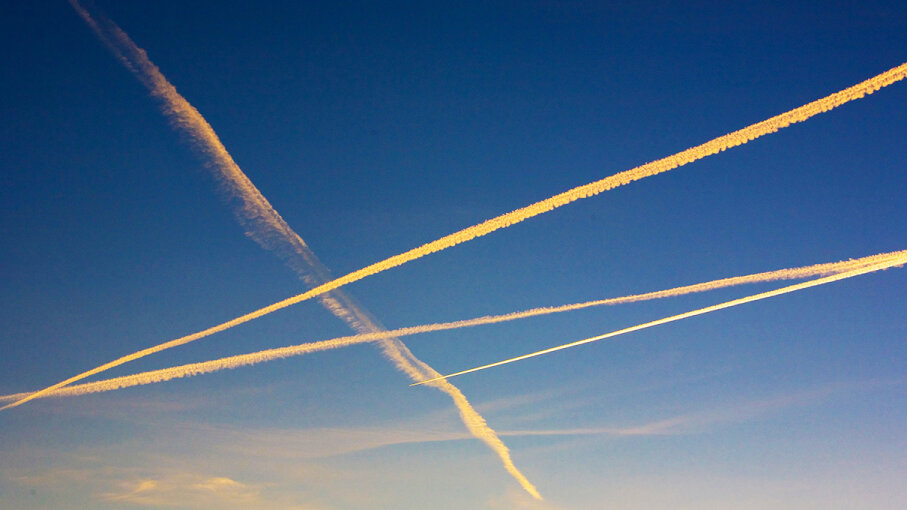 The trail of clouds that billow from an airplane streaking across the sky can be mesmerizing for children and adults alike. Jet engine traffic has become so common that it's not unusual to see several lingering streaks in the afternoon skies. And though many think these cloudy bands are beautiful against a bright blue sky, others are alarmed by their mere existence. Some people with concerns believe these cloudy trails are exacerbating global warming, while others have more elaborate theories, including that governments are secretly releasing harmful substances into the air and land via airplanes [source: The Keith Group].

Before we get into the various theories about the possible harmful effects of these contrails, let's first discuss the scientific explanation for these trails. Jet engines spew out very hot air, and because water vapor is also one of the byproducts of the exhaust, the air is also very humid [source: Ackerman]. However, high in the atmosphere where these jets fly, the air is typically very cold — often below -40 degrees Fahrenheit (-40 degrees Celsius). Additionally, the atmosphere at that height has low vapor pressure, or the force exerted by a gas on the surrounding environment.

When a jet engine is emitting out hot, humid air into an atmosphere that is so cold and has low vapor pressure, the result is condensation. The water vapor coming out of the engine quickly condenses into water droplets and then crystallizes into ice. The ice crystals are the clouds that we see forming behind the engine. That is why the streaks we see are called contrails, short for "condensation trails." To help explain it, scientists liken it to seeing your breath on cold days. You may have noticed that puffs of breath dissipate quickly on drier days. The same is true of contrails: When the atmosphere is more humid, the contrails linger longer, but when the atmosphere is dry, the contrails disappear more quickly. Contrails can last for hours and cover great distances [source: FAA].

This explanation makes sense. But, as author and airline pilot Patrick Smith wrote, the contrails consist of not just ice crystals and water vapor, but also of other byproducts of engine exhaust, including carbon dioxide, nitrogen oxides, sulfate particles and soot [source: Smith]. Some point out that these, in addition to the extra cloud cover, can have negative environmental effects. And conspiracy theorists have nicknamed contrails "chemtrails" because they suspect that governments are taking advantage of this scientific phenomenon to secretly release other substances into the atmosphere. 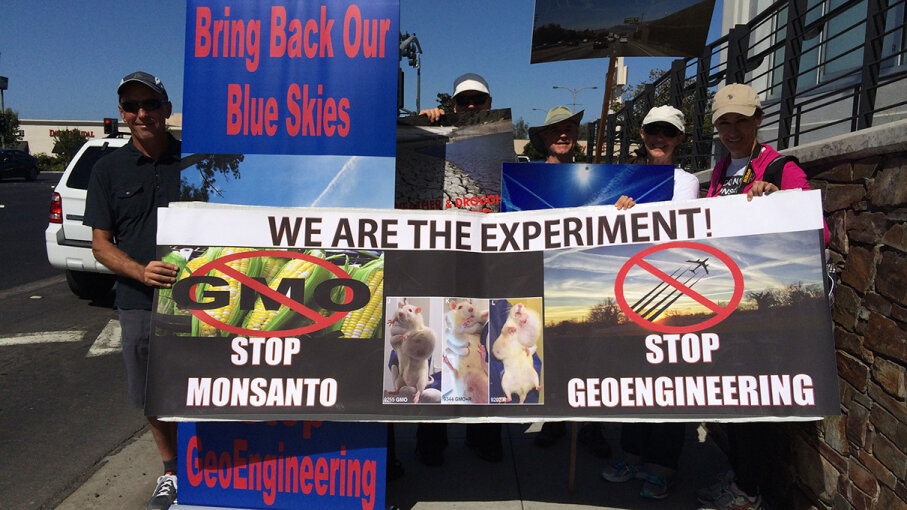 Protesters in 2014 march against what they believe to be a government conspiracy involving chemtrails and geoengineering. Lisa Werner/Getty Images

A U.S. Environmental Protection Agency fact sheet on contrails explains that contrails — even long-lasting ones — are simply trails of condensation and that they are not harmful. However, conspiracy theorists have become suspicious that the contrails expelled from jets today are thicker and linger longer than they did in the past. So, while people accept that contrails are natural byproducts of jet engines, their suspicion is that the government has since used that excuse to put harmful substances in those trails, thereby creating chemtrails. In addition, conspiracy theorists latch on to anecdotal evidence that connect epidemics of flulike symptoms to instances of contrails. Those who believe that there's something fishy about contrails have come up with several theories to explain what governments might be covering up.

One of the more extreme theories says that the government is intentionally spraying people with harmful substances in order to experiment with the effects — or even to "weed out" the sick and elderly. Other conspiracy theories suggest the chemtrails are an attempt by the government at mind control and even sterilization.

However, many reputable scientists dismiss these theories on the grounds that such experiments would be of no real use. "We have not seen any credible evidence that chemtrails exist. If we did see any evidence that governments were endangering their own citizens in the manner alleged in the chemtrails conspiracy, we would be eager to expose and stop any such activities," writes a group of Harvard engineers under the leadership of David Keith, professor of Applied Physics at the Harvard John A. Paulson School of Engineering and Applied Sciences.

For one thing, the chemtrails would be released so high in the atmosphere that unpredictable winds would move them around significantly, making such experiments worthless and unreliable [source: Hodapp]. Others speculate that the government is dumping barium salt aerosol on the land in order to assist in radar mapping for defense purposes [source: Knight].

Still others believe that the government could be experimenting with weather manipulation for defense purposes. This actually isn't as much of a stretch as it may seem. As long ago as the 1950s, the British successfully "seeded" clouds with salt, dry ice and silver iodide to make rain (see sidebar below).

It seems that weather manipulation, then, is very possible. Conspiracy theorists believe it might have connections to HAARP, the High Frequency Active Auroral Research Program, which studies the ionosphere to advance communication and navigation systems [source: HAARP].

Another popular theory is that chemtrails are well-intentioned attempts by the government to combat global warming or the depletion of the ozone layer by spraying particles into the atmosphere to deflect the sun's radiation — so called-albedo modification. Albedo refers to the amount of light radiation that is reflected back into space. Research on albedo modification is no secret and has been going on for years.

"We are confident that there is no currently active program to actually test or implement albedo modification outdoors. We are not now involved in outdoor experimentation, though we are indeed actively developing proposals for field experiments. This experiment will proceed only if it is conducted in a fully transparent and public manner, and only if it passes a comprehensive independent safety review. The experimental plans, operations and results will be publicly available and freely usable (no patenting)," writes Harvard's Keith.

Let's be clear, many studies have shown that contrails can have a negative impact on the environment, but not for the reasons spouted by conspiracy theorists. For one thing, contrails can spread into cirrus clouds. When that happens, the amount of sunlight reaching Earth's surface is reduced, and can lower temperatures. Moreover, studies have shown that contrails also trap heat. NASA scientists found that between 1975 and 1994, there was an increase in temperature of the United States that corresponded with the increase in the amount of contrails. Most studies suggest that contrails have a net warming effect on the planet.

So, whether you consider the conspiracy hype healthy skepticism or paranoia, contrails (along with the fuel consumption and energy use of the air traffic industry that cause them) are certainly an area of concern for the environment.

The British cloud-seeding experiment in the 1950s were far more effective than planned. On Aug. 15, 1952, they resulted in deadly flash floods in Lynmouth, a village in Devon, England. After dozens of people died in the floods, "Operation Cumulus" was put on hold. The British Ministry of Defense denied involvement in cloud-seeding until 2001, when documents exposing it were declassified.