On the Ground and In the Water 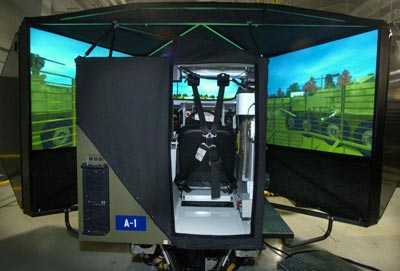 This simulator helps teach soldiers how to drive the Stryker armored vehicle.
Photo courtesy of the U.S. Army, photo by Jason Kaye

Although not as high profile as flight simulators, VR simulators for ground vehicles are an important part of the military's strategy. In fact, simulators are a key part of the Future Combat System (FCS) -- the foundation of the armed forces' future. The FCS consists of a networked battle command system and advanced vehicles and weapons platforms. Computer scientists designed FCS simulators to link together in a network, facilitating complex training missions involving multiple participants acting in various roles.

The FCS simulators include three computer monitors and a pair of joystick controllers attached to a console. The modules can simulate several different ground vehicles, including non-line-of-sight mortar vehicles, reconnaissance vehicles or an infantry carrier vehicle.

The Army uses several specific devices to train soldiers to drive specialized vehicles like tanks or the heavily-armored Stryker vehicle. Some of these look like long-lost twins to flight simulators. They not only accurately recreate the handling and feel of the vehicle they represent, but also can replicate just about any environment you can imagine. Trainees can learn how the real vehicle handles in treacherous weather conditions or difficult terrain. Networked simulators allow users to participate in complex war games.

Simulators can be pretty expensive. The newest Stryker simulator costs about $800,000 per unit. Still, when you compare that against the cost of an actual vehicle (which, depending upon the model variant, could be millions of dollars) and keep in mind that the soldier behind the controls will be safe from harm, it's easy to justify the cost.

Today, many training facilities are using simulators to familiarize soldiers with urban combat tactics. Today's battlefields are much different from those of previous eras, with soldiers venturing into cities and towns rather than drawing traditional battle lines. Simulators give the military a chance to teach soldiers how to navigate and operate effectively within urban landscapes --  without having to construct a physical artificial environment.

Navy submarine simulators are different from other military-vehicle simulators. There are no windows to the outside world on board a sub, so there isn't a need for lifelike graphics. Submarine simulators instead must provide realistic instrument readings as the crew navigates through the simulation. Some submarine simulators are stationary, which can detract from a user's sense of immersion. Others, however, are mounted on a set of pneumatic arms that can tilt the module, allowing it to physically simulate a diving or surfacing maneuver.

Another impressive Naval application of virtual environments is the virtual bridge. The navigation, seamanship and ship-handling trainer (NSST) accurately replicates the bridge of a large Navy ship. The simulator has dozens of computer monitors, some that serve as the bridge's windows and some that serve as ship monitors. Navy bridge teams can train together through various scenarios, building teamwork and ship-handling skills in the process.

In the next section, we'll look at how the military uses virtual environments to train foot soldiers.