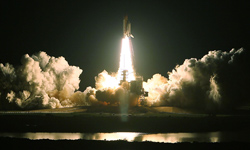 From a lead cargo tag uncovered by archaeologists in Jamestown, Va., to unauthorized postage stamps astronauts intended to sell, members of the space program have been inventive about what they take into space.

In between the final launch of the NASA space shuttle Atlantis in July 2011 and its first space flight 30 years earlier, there were more than 100 journeys -- and just about as many unusual items on board.

Wondering what other offbeat items humans have launched into space? Whether it's a paper airplane or a stuffed animal added to a space shuttle's manifesto, or even a DIY project that sent a child's toy into near-orbit, there have been plenty of upward-bound items that were far from necessary cargo. If you think these examples were odd, we're sure you'll want to know why the cells of a long-dead woman were on-board or why glow-in-the-dark beads tagged along for a ride.