The Legacy of Agent Orange 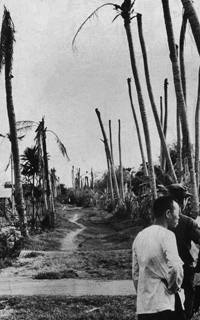 A path lined with bare palm trees in Ben Tre, South Vietnam, after the area was sprayed with Agent Orange during the Vietnam War.
Ralph Blumenthal/New York Times Co./Getty Images

No longer in use, Agent Orange remains a powerful symbol. Although the United States and Vietnam have normalized relations, Agent Orange and its cleanup are still contentious issues. Dioxin has dissipated in many areas, but concentrations of the poison are still high in some regions, particularly where South Vietnamese and U.S. soldiers stored Agent Orange.

Much of the Vietnamese countryside has regrown, in part because of reforestation efforts by local and international groups. Because dioxin cleanup is potentially very expensive, one activist has tried to implement cheaper, low-tech solutions in highly contaminated areas by planting "fences" of trees. These makeshift fences do more than protect villagers from dioxin. They also provide a potential source of income from products derived from the trees.

The health effects of Agent Orange truly form the core of its legacy. Numerous people in Vietnam still say that Agent Orange has irreparably damaged their health, killed friends and relatives, and caused birth defects and health problems in their children. One man told BBC News that Agent Orange essentially destroyed his legs and gave him chronic headaches [source: BBC News]. One of his sons also suffers from headaches, while another of his children died from complications related to birth defects.

Areas sprayed with Agent Orange show a much higher incidence of the serious health problems previously discussed. For example, the town of Ben Tre has 140,000 residents; the Red Cross estimates that 58,000 of them have suffered adverse health effects because of Agent Orange [source: Hitchens]. Overall, an estimated 1 million out of 84 million Vietnamese have been poisoned by Agent Orange, and children continue to be born with birth defects likely caused by the herbicide [source: Hitchens]. There is no consensus as to how lo­ng dioxin will remain in the soil in Vietnam, but without a large-scale cleanup, the next generation of Vietnamese children likely will be subject to some of the same health problems that their parents and grandparents have faced.

Many American veterans of the Vietnam War continue to suffer from health problems, some of which are passed onto their children. Perhaps no Agent Orange story is complete without discussing Elmo R. Zumwalt Jr., a Navy admiral who commanded naval forces in Vietnam and was credited with helping to end race and gender discrimination in the Navy [source: Goldstein].

During the Vietnam War, Zumwalt was concerned about snipers in the Mekong Delta. He ordered that Agent Orange be sprayed to deprive snipers of cover. Coincidentally, Admiral Zumwalt's son, Lt. Elmo Zumwalt III, commanded a boat that operated in the Mekong Delta. At age 42, Elmo Zumwalt III died of cancer, likely caused by dioxin exposure. His son, Elmo IV, had a severe learning disability.

When both were still alive, Zumwalts II and III wrote a book together in which they acknowledged the likely connection between Agent Orange exposure and health problems in the family. Admiral Zumwalt said he didn't regret ordering the use of Agent Orange -- at the time, he had been told the herbicide didn't pose a health risk -- but that his son and grandson's problems haunted him daily [source: Goldstein]. Both Zumwalts pointed out that using Agent Orange to clear away the thick jungle along the Mekong Delta helped in fighting snipers and significantly decreased the casualty rate of American soldiers. Later in life, Admiral Zumwalt advocated for compensation for Agent Orange victims.

For more information about Agent Orange and related topics, please scroll through the links below.