Aluminum isn't found in nature as a pure element. It exhibits relatively high chemical reactivity, which means it tends to bond with other elements to form compounds. More than 270 minerals in Earth's rocks and soils contain aluminum compounds. This makes aluminum the most abundant metal and the third most abundant element in Earth's crust. Only silicon and oxygen are more common than aluminum. The next most common metal after aluminum is iron, followed by magnesium, titanium an­d manganese.­

The primary s­ource of aluminum is an ore known as bauxite. An ore is any naturally occurring solid m­aterial from which a metal or valuable mineral can be obtained. In this case, the solid material is a mixture of hydrated aluminum oxide and hydrated iron oxide. Hydrated refers to water molecules that are chemically bound to the two compounds. The chemical formula for aluminum oxide is Al2O3. The formula for iron oxide is Fe2O3­.

Deposits of bauxite occur as flat layers lying near the Earth's surface and may cover many miles. Geologists locate these deposits by prospecting -- taking core samples or drilling in soils suspected of containing the ore. By analyzing the cores, scientists are able to determine the quantity and quality of the bauxite. 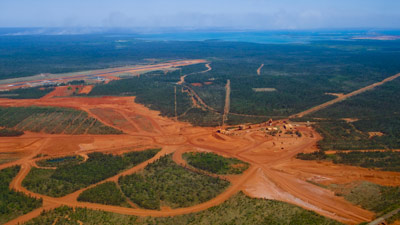 ­After th­e ore is discovered, open-pit mines typically provide the bauxite that will eventually become aluminum. First bulldozers clear land above a depos­it. Then workers loosen the soil with explosives, which bring the ore to the surface. Giant shovels then scoop up the bauxite-rich soil and dump it into trucks, which carry the ore to a processing plant. ­France was the first site of large-scale bauxite mining. In the United States, Arkansas was a major supplier of bauxite before, during and after World War II. But today, the material is predominantly mined in Australia, Africa, South America and the Caribbean.

The first step in the commercial production of aluminum is the separation of aluminum oxide from the iron oxide in bauxite. This is accomplished using a technique developed by Karl Joseph Bayer, an Austrian chemist, in 1888. In the Bayer process, bauxite is mixed with caustic soda, or sodium hydroxide, and heated under pressure. The sodium hydroxide dissolves the aluminum oxide, forming sodium aluminate. The iron oxide remains solid and is separated by filtration. Finally, aluminum hydroxide introduced to the liquid sodium aluminate causes aluminum oxide to precipitate, or come out of solution as a solid. These crystals are washed and heated to get rid of the water. The result is pure aluminum oxide, a fine white powder also known as alumina.

­Alumina is a handy material in its own right. Its hardness makes it useful as an abrasive and as a component in cutting tools. It can also be used to purify water and to make ceramics and other building materials. But its primary use is to act as a starting point to extract pure aluminum. In the next section, we'll see look at the steps required to transform alumina into aluminum.