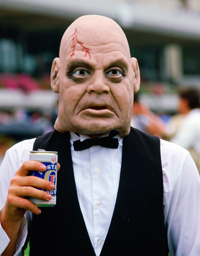 Tim Graham/Getty Images
Without smelting, this monster might not be able to enjoy his can of beer.

­Transforming alumina -- aluminum oxide -- into aluminum represented a major milestone in the industrial revolution. Until modern smelting techniques evolved, only small quantities of aluminum could be obtained. Most ea­rly processes relied on displacing aluminum with more reactive metals, but the metal remained expensive and relatively elusive. That all changed in 1886 -- the year two aspiring chemists and industrialists developed a smelting process based on electrolysis.

Electrolysis literally means "breaking down by electricity," and it can be used to decompose one chemical into component chemicals. The traditional setup for electrolysis requires two metal electrodes being submerged in a liquid or molten sample of a material containing positive and negative ions. When the electrodes are connected to a battery, one electrode becomes a positive terminal, or anode. The other electrode becomes a negative terminal, or cathode. Because the electrodes are electrically charged, they attract or repel charged particles dissolved in the solution. The positive anode attracts negatively charged ions, while the negative cathode attracts positively charged ions.

Sir Humphry Davy, the British chemist credited with giving aluminum its name, tried unsuccessfully to produce aluminum by electrolysis in the early 1800s. The French schoolteacher and amateur chemist Henri Saint-Claire Deville also came up empty-handed. Then, in February 1886, after several years of experimentation, American Charles Martin Hall came across just the right formula: passing a direct current through a solution of alumina dissolved in molten cryolite, or sodium aluminum fluoride (Na3AlF6). Until 1987, cryolite was mined from deposits found on the west coast of Greenland. Today, chemists synthesize the compound from the mineral fluorite, which is much more common.

The steps in aluminum smelting are described below:

The alumin­um smelting process developed by Hall resulted in large amounts of pure aluminum. Suddenly, the metal was no longer rare. The idea of producing aluminum via electrolytic reduction in cryolite wasn't rare, either. A Frenchman by the name of Paul L.T. Heroult came up with the same idea just a few months later. Hall, however, received a patent for the process in 1889, one year after he founded the Pittsburgh Reduction Company, which would later become the Aluminum Company of America, or Alcoa. By 1891, aluminum production reached well over 300 tons (272 metric tons) [source: Alcoa].

On the next page, we'll see what happens to the aluminum after it emerges from the electrolytic cells.