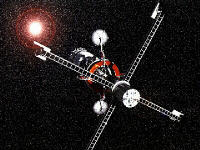 Antimatter spacecraft like the one in this artist concept could carry us beyond the solar system at amazing speeds.
Photo courtesy Laboratory for Energetic Particle Science at Penn State University

NASA is possibly only a few decades away from developing an antimatter spacecraft that would cut fuel costs to a fraction of what they are today. In October 2000, NASA scientists announced early designs for an antimatter engine that could generate enormous thrust with only small amounts of antimatter fueling it. The amount of antimatter needed to supply the engine for a one-year trip to Mars could be as little as a millionth of a gram, according to a report in that month's issue of Journal of Propulsion and Power.

Matter-antimatter propulsion will be the most efficient propulsion ever developed, because 100 percent of the mass of the matter and antimatter is converted into energy. When matter and antimatter collide, the energy released by their annihilation releases about 10 billion times the energy that chemical energy such as hydrogen and oxygen combustion, the kind used by the space shuttle, releases. Matter-antimatter reactions are 1,000 times more powerful than the nuclear fission produced in nuclear power plants and 300 times more powerful than nuclear fusion energy. So, matter-antimatter engines have the potential to take us farther with less fuel. The problem is creating and storing the antimatter. There are three main components to a matter-antimatter engine:

The storage rings on the spacecraft will hold the antimatter.
Photo courtesy Laboratory for Energetic Particle Science at Penn State University

Approximately 10 grams of antiprotons would be enough fuel to send a manned spacecraft to Mars in one month. Today, it takes nearly a year for an unmanned spacecraft to reach Mars. In 1996, the Mars Global Surveyor took 11 months to arrive at Mars. Scientists believe that the speed of an matter-antimatter powered spacecraft would allow man to go where no man has gone before in space. It would be possible to make trips to Jupiter and even beyond the heliopause, the point at which the sun's radiation ends. But it will still be a long time before astronauts are asking their starship's helmsman to take them to warp speed.