How Does Baxter Compare to Other Industrial Robots? 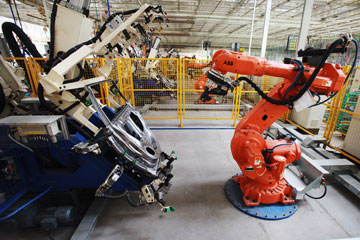 Baxter is not able to do the heavy-duty work that robots like these do in an automotive plant in Tianjin, China, but it’s much easier and more affordable for smaller companies to integrate Baxter into their workplaces.
© ChinaFotoPress/Getty Images

One of the major differences between Baxter and other industrial robots is price. Most industrial robots cost $100,000 or more to purchase, and much more to maintain and operate due to the need for programmers to write the code that controls them [source: Kelly]. They also generally need to have specialized environments built around them to work efficiently and keep humans safe, so you also have to factor in engineering and construction costs. This requires a substantial investment, both short term and long term, possibly totaling hundreds of thousands of dollars.

Baxter, on the other hand, costs $22,000 as a base model, which includes a one-year warranty and a year of software upgrades [source: Rethink Robotics]. You can also get a three-year warranty for an additional fee. Rethink managed to keep the price low by keeping cost in mind during the design process and working with parts suppliers to determine what capabilities their products could bring to Baxter. It also has a lot of plastic parts. Because of the low cost, Baxter should be within the reach of small to medium businesses that currently cannot afford automation via robotics. Rethink estimates that the cost of operation works out to about $4.00 an hour.

And rather than requiring high-level technical staff to spend days, weeks or months programming (via code or the use of a push-button pendant), Baxter requires far less expertise and time to instruct than most industrial robots. It has a somewhat intuitive user interface via the facial expressions and prompts displayed on its screen. A non-technical person can teach it what to do through arm movement and simple button presses, and it can master a new task in half an hour or so. There is also little assembly or setup required. It only takes about an hour to get Baxter up and running once it's taken out of the crate.

There are also huge differences in safety and flexibility. Other typical industrial robots have to be kept in cages or otherwise locked away from humans, lest their rigid, fast and powerful movements injure or kill someone. Their work environments have to be designed around them, rather than them fitting into existing human-occupied environments. Baxter can work alongside humans without risk of injuring them due to its built-in safety features. It can adapt to its surroundings due to a range of sensors, and it has been programmed to have a certain level of common sense. For instance, it knows that if it drops an object, it needs to stop and retrieve another before continuing its motion. And it can adjust accordingly if a conveyor belt speeds up or slows down. Baxter's adaptability and safety allow it to be plopped onto an existing assembly line without too much fuss.

Baxter does have some limitations in that it is not as fast or precise as existing factory robots, and it can't do heavy lifting. It's more adept at the human than the superhuman. This means that rather than replacing existing robots, Baxter could be used to fill new roles so that current manual but mundane tasks could be automated relatively cheaply.