by Bernadette Johnson
NEXT PAGE 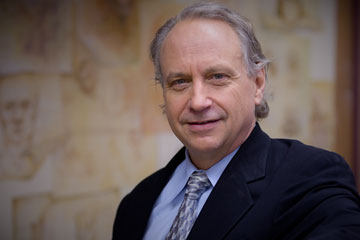 Rodney Brooks, the man behind Baxter, is also responsible for many of the robots that already exist in homes today. If a Roomba takes care of your light vacuuming duties, you can thank Mr. Brooks.
Image courtesy of Rethink Robotics

Rodney Brooks has been one busy roboticist. He joined the faculty of the Massachusetts Institute of Technology (MIT) in 1984 and eventually became the Director of their Computer Science and Artificial Intelligence Laboratory. While still there in 1990, he co-founded iRobot with two of his students in an effort to get back to more hands-on robotics work. That company eventually brought Roomba and other domestic cleaning robots into millions of homes worldwide, edging out the scant competition with a much better price point.

After that success, Brooks decided he wanted to revolutionize another industry with robotics, so he stepped down from iRobot and MIT and founded a new company called Rethink Robotics (formerly Heartland Robotics). Rethink seeks to put more robots into the manufacturing industry. Manufacturers already use heavy industrial robots in droves. Industrial robots are moving machines that can be programmed to manipulate materials and tools to perform various manufacturing tasks. They are used to automate the building of cars and production of a host of other goods. As a rule, they are extremely expensive to purchase, program and maintain, and they are therefore out of the hands of anyone but very large manufacturers. Such robots are also very precise and fast, but do not adapt easily to new surroundings and cannot work in close proximity with humans without risk to life and limb.

Brooks and his company therefore set out to make a cheap and adaptable robot that could be purchased by smaller manufacturers and used to automate mundane tasks that are currently being performed by people. And their work has come to fruition with the release of Baxter, a $22,000 robot that can be safely placed into a human work environment and easily trained by a non-technical person to perform a variety of repetitive tasks.