Browse the article How Biomechatronics Works 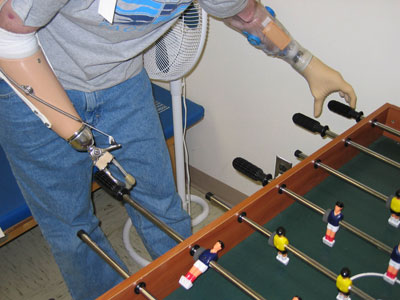 In the TV series "The Six Million Dollar Man," scientists restore a crippled test pilot, who lost legs, one arm and an eye. They have the technology, so they rebuild Steve Austin and give him superhuman qualities. While this is total science fiction, modern robotics is inching ever closer to this vision in a field known as biomechatronics.

Biomechatronics is the merging of man with machine -- like the cyborg of science fiction. It is an interdisciplinary field encompassing biology, neurosciences, mechanics, electronics and robotics. Biomechatronic scientists attempt to make devices that interact with human muscle, skeleton, and nervous systems with the goals of assisting or enhancing human motor control that can be lost or impaired by trauma, disease or birth defects.

Consider what happens when you lift your foot to walk:

This system has sensors (nerve cells, muscle spindles), actuators (muscles) and a controller (brain/spinal cord).  In this article, we will find out how biomechatronic devices work using these components, explore the current progress of biomechatronics research and learn about the benefits of such devices.

Thanks to Dr. Scott Bernstein for his assistance with this article.

Any biomechatronic system must have the same types of components.:

Biosensors may be wires that detect electrical activity such as galvanic detectors (which detect an electric current produced by chemical means) on the skin, needle electrodes implanted in muscle, and/or solid-state electrode arrays with nerves growing through them.

Mechanical sensors measure information about the device (such as limb position, applied force and load) and relate to the biosensor and/or the controller. These are mechanical devices such as force meters and accelerometers.

The actuator is an artificial muscle that produces force or movement. The actuator can be a motor that aids or replaces the user's native muscle depending upon whether the device is orthotic or prosthetic.

See the animation below to view how the system works. Next, learn about the progress made in the field of biomechatronics.

Several laboratories around the world conduct research in biomechatronics, including MIT, University of Twente (Netherlands), and University of California at Berkeley. Current research focuses on three main areas:

Analyze Human Motions Human motions are complex, whether it be reaching for a glass or walking over rough terrain. We must understand how humans move so that we can design biomechatronic devices that effectively mimic and aid human movement.

Interfacing Electronic Devices with Humans An important aspect that separates biomechatronics devices from conventional orthotic and prosthetic devices is the ability to connect with the nerves and muscle systems of the user so he can send and receive information from the device.

Peter Veltink's group in the Netherlands is using implantable electrodes to stimulate the calf muscles. They are developing sensing and control methods for the dorsiflexor muscles, which lift the foot during walking. This will help to treat paralysis and stroke victims who cannot control this foot during walking (i.e. dropped foot).

Hermie Hermens and Laura Kallenberg of Veltink's group are using electrodes placed on the skin to monitor the electrical activity of the underlying muscles (electromyography) rather than using electrodes implanted directly into them. This reduces pain and discomfort and may also be a pathway for 2-way communication. (http://bss.ewi.utwente.nl/research/biomechatronics/rsi.doc/index.html).

Veltink's group is also using electromyogram surface electrodes for feedback and control of lower-leg prosthetics. In the prosthetic, the knee angle is detected and the information is relayed by electromyography to the stump muscles in the amputated leg. The wearer can sense the activity and be taught to interpret it. Eventually the electrical activity of the stump muscles might be used to control the prosthetic.

Next, learn about biomechantronic research at MIT.

Dr. Kevin Warwick of the Reading University in the United Kingdom has tested human-computer interfaces on himself. Warwick was surgically implanted with a tiny array of 100 silicon electrodes into his medial nerve of his left arm below the wrist. Wires from the implant ran under his skin and out of his elbow where he connected with amplifiers and other circuits to convert his nerve impulses to digital electronic signals. With this implant, he was able to operate a separate robotic hand remotely by making movements with his own hand. The experiment ran for 3 months and Warwick described it in his book titled "I, Cyborg." 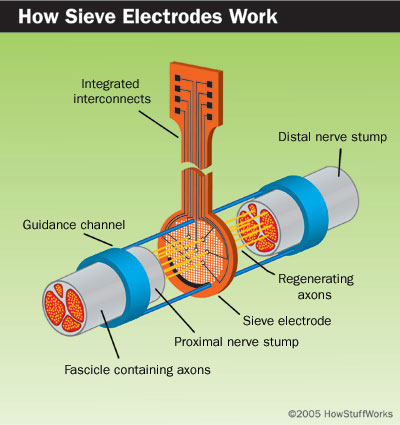 Current and Future Uses of Biomechatronics

Most actuators that are used in orthotic and prosthetic devices are electrical motors or electrical wires that shrink when current is passed through them. While these devices can provide contractile force, they do not come close to mimicking the dynamic flexibility of living muscle tissue. But what if you could make real muscle actuators? In Hugh Herr's laboratory at MIT, they have made a robotic fish that propelled by living muscle tissue taken from frog legs. The robotic fish had the following components:

The frog muscles were attached to either side of the tail and to the plastic spine of the robot and electrodes from the stimulator were attached to them. The muscles on either side were alternately stimulated to produce a swimming motion. The robotic fish was placed in a tank of salt solution designed to keep the muscles alive. The fish swam for 4 hours out of 42 with a velocity greater than 75 percent of its maximum. The robot could swim forward, backward, turn, and stop. This was a prototype of a biomechatronic device with a living actuator.

While advancements in body armor technology can help soldiers in the Iraq War survive explosions, many of these survivors suffer damaged limbs (hands, arms, feet, legs) that require amputation. This situation has spurred research into advanced orthotic/prosthetic devices such as the ones developed in Hugh Herr's lab at MIT. The Department of Veterans Affairs and the Dept. of Defense are funding several biomechatronics groups to meet the needs of veterans and soldiers in the field.

Recently, Claudia Mitchell, a former Marine and amputee, has tested a prosthetic arm developed by Dr. Todd Kuiken at the Rehabilitation Institute of Chicago. A plastic surgeon, Dr. Gregory Dumainian at Northwestern Memorial Hospital in Chicago re-directed the nerves that control her missing arm to her chest. The nerves re-grew close to the skin of her chest. Tiny electrodes on her skin pick up the electrical activity of these nerves and send signals to the motors in the arm. She is able to control the arm's movements by thinking about it. As of now, the prosthetic arm is not truly biomechatronic in that signals only go one way, from Claudia to the arm. Dr. Kuiken is working on the next step of having the arm provide feedback to her, including sensations such as pain and pressure.

Until now, we have primarily addressed how biomechatronic devices can help people with impaired motor function. But what could these devices do to a normal person? Could they give him/her superhuman strength like Steve Austin, the "Six Million Dollar Man"? To this effect, investigators at the University of California at Berkeley have developed a machine or exoskeleton to enhance the walking ability of a normal human. The Berkeley Lower Extremity Exoskeleton (BLEEX) uses metal leg braces that powered by motors to make it easier for the wearer to walk. Sensors and actuators in the device provide feedback information to adjust the movements and the load while walking. The device's controller and engine are located in avest attached to a backpack frame. While the device itself weighs 100 pounds, it enables a person to haul a 70-pound backpack, while feeling as if he/she is merely carrying 5 pounds.

When fully developed, biomechatronic devices will be useful in many ways:

The major drawbacks to biomechatronics devices are the possibility of infection (as non-biological parts are implanted into living tissue) pain and discomfort. However, the promises of this new technology provide hope that those individuals with impaired motor function will be able to have restored functions that mimic normal human movements and, perhaps, make them better, stronger or faster than before.

For lots more information on biomechatronics and related topics, check out the links on the next page.