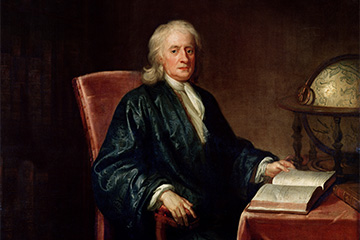 Sir Isaac Newton was an intellectual rock star (as well as a snazzy dresser).
FPG/Getty Images

Next to E = mc², F = ma is the most famous equation in all of physics. Yet many people remain mystified by this fairly simple algebraic expression. It's actually a mathematical representation of Isaac Newton's second law of motion, one of the great scientist's most important contributions. The "second" implies that other laws exist, and, luckily for students and trivia hounds everywhere, there are only two additional laws of motion. All three are presented here, using Newton's own words:

These three laws form the foundation of what is known as classical mechanics, or the science concerned with the motion of bodies being acted upon by forces. The bodies in motion could be large objects, such as orbiting moons or planets, or they could be ordinary objects on Earth's surface, such as moving vehicles or speeding bullets. Even bodies at rest are fair game.

Where classical mechanics begins to fall apart is when it tries to describe the motion of very small bodies, such as electrons. Physicists had to create a new paradigm, known as quantum mechanics, to describe the behavior of objects at the atomic and subatomic level.

But quantum mechanics is beyond the scope of this article. Our focus will be classical mechanics and Newton's three laws. We'll examine each in detail, both from a theoretical and a practical point of view. We'll also discuss the history of these laws, because how Newton arrived at his conclusions is just as important as the conclusions themselves. The best place to start, of course, is at the beginning -- Newton's first law.