The Science of Bomb Smelling 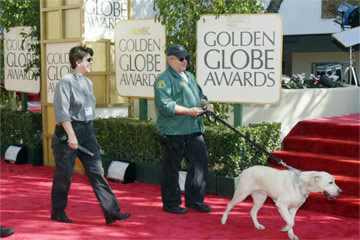 That canine is really working the red carpet at the annual Golden Globe Awards, sniffing for bombs that is.
Carlo Allegri/Getty Images

Dogs smell bombs like they smell everything else. First, Brandy sniffed. Her sniff reshaped her nose so that air, including odors from the bomb, hit her odor receptors. The signal traveled from her nose to her somatosensory cortex, an area of the canine (and human) brain that processes sensations, including smells.

Brandy then interpreted the smell; she decided she'd smelled an explosive. She did that by the bomb's odor signature, says Lawrence Myers, an associate professor of anatomy, physiology and pharmacology at Auburn University's College of Veterinary Medicine. C-4's signature includes which odors are in it, their ratios and, possibly, whether C-4 tickled a nerve in her nose called the trigeminal. Because Brandy smelled C-4 many times, she remembered its signature, and she knew to sit when she smelled it.

Could another animal have smelled the bomb better than Brandy -- a raccoon, a rat or … you? We don't know which animal has the best sense of smell because no good studies have directly compared animals, says professor Myers.

Although humans smell using most of the same equipment as dogs, differences exist. Dogs are better than us at sucking in odors. Their noses are longer and roomier than ours, so they can inhale more air per sniff. Dogs also have more odor receptors in their noses than we do -- 20 to 40 times more, according to Myers. Despite these two advantages for dogs, whose nose is more sensitive -- meaning, who can smell an odor with fewer molecules of it in the air -- depends on the chemical being smelled. For example, dogs can detect eugenol, an oil in cloves, at one-millionth the concentration that humans can [source: Myers]. However, Myers, in informal experiments, found that humans can smell acetone at lesser concentrations than dogs can.

While dogs largely interpret the world through smell, and we do not, it's not a true advantage for dogs. With training, we can pay attention and discriminate smells as well as dogs can -- wine tasters and perfumers are evidence of that.

All of this leads to an answer scientists often give: "Dogs almost certainly are better than humans at smelling for explosives, but as a scientist, I can't state that," says Myers.

In some indisputable ways, dogs are better. Dogs can sniff closer to explosives on the ground. We'd look suspicious on all fours. Practically speaking, it comes down to whose face we want to put closer to the bomb.