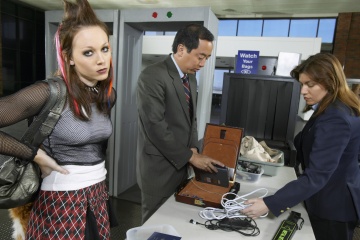 Waiting at airport security can be a drag, but maybe there's some rhyme and reason as to why your cell phone has to basically be nonexistent throughout the process.
Digital Vision./Thinkstock

If you've traveled by commercial plane since September 11, 2001, you know the security drill: Separate your carefully-measured liquids into a clear plastic bag, remove your shoes and be prepared for the occasional pat-down. Now there's one more concern to add to the list: Make sure your cell phone is charged.

In 2014, the Transportation Security Administration announced that it would not allow cell phones or other electronic devices on U.S.-bound planes unless travelers are able to turn them on at the request of security agents [sources: NBC News, Whitehead]. While business travelers may be accustomed to occasional requests to power-up their laptops before passing through the security gate, until recently, passengers have been able to send their cell phones unceremoniously through the X-ray machine along with their keys, belts and loose change. But now, powerless devices will be prohibited from passing through security at certain airports, and the travelers carrying those devices may be subject to additional screening measures [source: TSA].

The TSA has not elaborated on the reasons for its new security measures or specified the airports at which the cell phone checks will go into effect, but the Associated Press reported that "American intelligence officials have been concerned about new al-Qaida efforts to produce a bomb that would go undetected through airport security" [source: Lester].

The Telegraph reports that the new TSA policies came in response to an al-Qaida bomb threat and speculated that by turning on their mobile phones, passengers can prove to security screeners that the phone is in fact a working device and that its batteries are not hidden explosives [source: Whitehead]. NBC News seconded that theory, citing concerns by unnamed U.S. officials that a cellphone, tablet, laptop or other electronic device could be used as a bomb [source: NBC News]. Of course, the effectiveness of the security campaign is another issue: Some security experts argue that the screenings do little more than contribute to a false sense of security, since an electronic device could potentially still turn on whether or not it contains hidden explosives [sources: Richtel, Tobias].