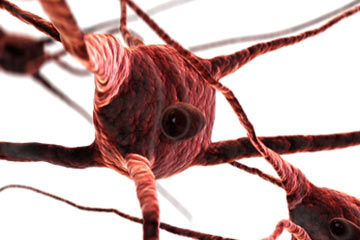 Caffeine wakes you up by fooling adenosine receptors. Adenosine slows down nerve cell activity along neural pathways like these, but caffeine (which binds to the same receptors) speeds activity up.
©iStockphoto/ChristianAnthony

Why do so many people consume so much caffeine? Why does caffeine wake you up? In short, it's all about two words: brain chemistry.

In the article How Sleep Works, the action of adenosine is discussed in detail. But while it sounds like advanced science, it's really pretty simple. As adenosine is created in the brain, it binds to adenosine receptors. This binding causes drowsiness by slowing down nerve cell activity. In the brain, this also causes blood vessels to dilate, most likely to let more oxygen into that organ during sleep.

To a nerve cell, caffeine looks like adenosine: Caffeine binds to the adenosine receptor. However, caffeine doesn't slow down the cell's activity like adenosine would. As a result, the cell can no longer identify adenosine because caffeine is taking up all the receptors that adenosine would normally bind to. Instead of slowing down because of the adenosine's effect, the nerve cells speed up. Caffeine also causes the brain's blood vessels to constrict, because it blocks adenosine's ability to open them up. This effect is why some headache medicines like Anacin contain caffeine -- constricting blood vessels in the brain can help stop a vascular headache.

Caffeine's effect on the brain causes increased neuron firing. The pituitary gland senses this activity and thinks some sort of emergency must be occurring, so it releases hormones that tell the adrenal glands to produce adrenaline (epinephrine). Adrenaline is the "fight or flight" hormone, and it has a number of effects on your body:

This explains why, after consuming a big cup of coffee, your hands get cold, your muscles grow tense, you feel excited and your heart beats faster.

Adenosine isn't the only neurotransmitter affected by caffeine. Read on to learn about how the drug affects dopamine, another important chemical in the body.