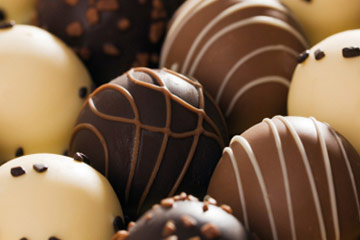 The dopamine-affecting caffeine in chocolate is part of why you feel happy when you eat it.
©iStockphoto/YinYang

Dopamine is a neurotransmitter that activates pleasure centers in certain parts of the brain. Heroin and cocaine manipulate dopamine levels by slowing down the rate of dopamine reabsorption. Caffeine increases dopamine levels in the same way. Its effect is much weaker than heroin's, but the mechanism is the same. Researchers suspect that this dopamine connection is what contributes to caffeine addiction.

You can see why your body might like caffeine in the short term, especially if you are low on sleep and need to remain active. Caffeine blocks adenosine reception so you feel alert. It injects adrenaline into the system to give you a boost. And it manipulates dopamine production to make you feel good.

But caffeine can cause a vicious cycle of problems in the long term. For example, once caffeine-induced adrenaline wears off, you face fatigue and depression. Another cup of coffee or energy drink can get the adrenaline flowing again, but having your body in a state of emergency, jumpy and irritable all day long, isn't very healthy.

The most important long-term problem with caffeine is its effect on your sleep. The half-life of caffeine in your body is about six hours. That means that drinking a big cup of coffee containing 200 milligrams of caffeine at 3:00 p.m. will leave about 100 milligrams of that caffeine in your system at 9:00 p.m. Adenosine reception, which is affected by caffeine, is important to sleep, and especially to deep sleep. You may be able to fall asleep hours after that big cup of coffee, but your body will probably miss out on the benefits of deep sleep.

That sleep deficit adds up fast. The next day you feel worse, so you need caffeine as soon as you get out of bed. The cycle continues day after day. Once you get into this cycle, you have to keep consuming the drug to put off an inevitable comedown. Trying to quit can leave you tired and depressed, fighting splitting headaches as blood vessels in the brain dilate. These negative effects can be enough to force caffeine addicts back onto the drug [source: Johns Hopkins].

But caffeine is not a one-sided drug. Read on to learn about some ways that caffeine can actually improve your health.