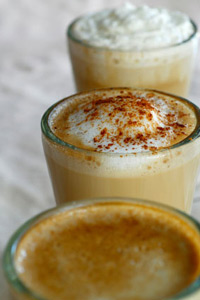 Though caffeine can be useful, be mindful that it is a drug -- and be aware of how much fat and sugar your favorite forms of it contain.
©iStockphoto.com/edcorbo

Caffeine had long been on the list of don'ts for people hoping to lead a healthy lifestyle. Doctors pointed to caffeine's negative effects on the nervous system and its track record of increasing anxiety, stress and food cravings, as well as its damaging effects on sleep quality. Recent studies, however, suggest that coffee and caffeine may actually offer some significant medical benefits.

Remember the more than 19,000 studies mentioned earlier? Those studies have uncovered a range of positive effects that caffeine seems to have on the human body:

Some of these findings may have something to do with other healthful properties of the coffee bean, but most can be linked to caffeine directly. Researchers are even developing drugs for Parkinson's disease containing caffeine derivatives.

More research is uncovering potential benefits from this commonly consumed drug. A study by the Byrd Alzheimer's Institute in Tampa, Fla., showed that lab mice injected with caffeine were protected against developing Alzheimer's disease. The injections even helped reduce symptoms in those that had the disease. The findings lead doctors to believe that up to five cups of coffee a day could have the same positive effect on humans [source: Arendash].

And a 2007 study at Rutgers University suggested that regular exercise combined with daily doses of caffeine could increase the destruction of precancerous skin cells in mice. Once again, the findings have not yet been tested on humans, but the indication is that it will have similar effects [source: Lu].

Despite these recent findings, most doctors still recommend moderation in regard to caffeine intake. These studies give hope to those who stand by the value of their morning cup of Joe, but there's still a long way to go to determine the long-term effects of caffeine use.