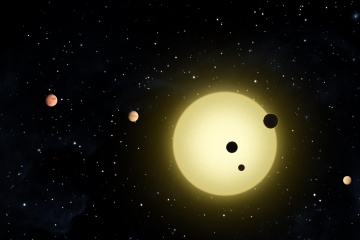 That's Kepler-11, a sun-like star around which six planets orbit. At times, two or more planets pass in front of the star at once. This planetary system was picked up by NASA's Kepler spacecraft on Aug. 26, 2010. Kind of makes you want to start looking, too, doesn't it?
Image courtesy NASA/Tim Pyle

Can amateur astronomers spot exoplanets? Of course not. Who do you think you are? Planet-hunting outside our solar system is only for those with advanced science degrees, lab coats and Neil deGrasse Tyson's phone number in their cell phones. The rest of us can spend our nights watching "Extreme Weight Loss" while eating ice cream, ignoring the telescope in the corner that's pointed at the neighbor's house.

That would make sense, wouldn't it? After all, in what other area of science can amateur hobbyists stumble onto discoveries never before observed? Imagine your great-aunt, for instance, having the power to spot the Higgs boson with the atom smasher she got at a yard sale.

But it turns out you might have a shot. It speaks to the vastness of space — and how little we know about it — that a regular Jane or Joe can essentially come across a planet in a neighboring solar system.

A word of caution: "Discovering" exoplanets is a lot different from "detecting" them. Amateurs who have spotted exoplanets have had some pretty serious equipment, and many credited with "spotting" exoplanets are really confirming a transit that professionals have already detected with telescopes. One way exoplanets can be spotted is via transit, meaning that the light from a star will show a dip when a planet passes in front of it [source: Naeye]. Of the 340 exoplanets discovered between 1991 and 2011, there are 58 known transiting planets – and most of these were picked up by amateurs [source: Harrison].

Being keyed into what events scientists are looking for (and when) is not the only way that amateurs can contribute to astronomy. If you're looking to help spot planetary beginnings, check out Disk Detective. Led and funded by NASA, the project gives astronomy hobbyists a chance to help classify debris disks among a huge collection of interstellar images collected by NASA's WISE mission [source: DiskDetective.Org]. After a brief tutorial, anyone, even folks without telescopes, can analyze images to help astronomers sort through the vast number of pictures.

Are exoplanets small potatoes to you? You might be interested in helping astronomers get a good look at distant galaxies. Much like Disk Detective, Galaxy Zoo contains millions of images collected from various telescopes, including Hubble. Get a little primer on what you're looking at, and you can help classify galaxies by shape or features. Plus, all that citizen science has contributed to an impressive collection of published research.

It might not just be an exoplanet or galaxy you find. In 2007, a Dutch woman named Hanny van Arkel clicked through pictures on Galaxy Zoo and noticed a weird cloud in one of the images. Astronomers looked at it and realized she had spotted something they had never seen before: a gas cloud as big as our solar system, illuminated by energy from a nearby galaxy's black hole [source: Plait]. They named it Hanny's Voorwerp — Hanny's object in Dutch.

Who was James Webb?
Why Do Stars Twinkle?
A Portion of Your Suntan Comes From Distant Galaxies