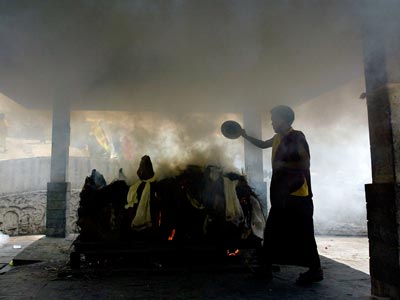 The body of 28-year-old Everest climber and Sherpa guide Karma Gyalzen is cremated May 27, 2003, in Kathmandu, Nepal.
Paula Bronstein/Getty Images

Hinduism is unique among the world's major religions in mandating cremation, called antim-sanskar ("last rite") or antiesthi ("last sacrifice"), as one of the 16 life rituals. Cremation is believed not only to dispose of the body in this life but also to usher the soul into the next world or its rebirth into the next life. Followers of Jainism and Sikhism also strongly prefer cremation, although the doctrines do not strictly require it.

Open-air cremations are practiced regularly in India. In the holy city of Varanasi, bodies are burned atop wood-fueled pyres on the banks of the Ganges River. Varanasi is also home to an electric crematorium that opened in 1989 but has since faced budgetary issues and power shortages.

Christianity, Judaism and Islam all have traditions that frown upon cremation, if not outright prohibit it. Islam instructs its followers to bury their dead as quickly as possible, preferably within the day of the death. (Abhorrence for any practice seen as desecrating a Muslim body also means that there is a shortage of cadavers for medical research in Muslim countries.)

Orthodox and Conservative Jews adamantly oppose cremation on grounds of biblical and Talmudic rulings. Many Liberal and Reform Jews support cremation as an option. However, the history of Nazi cremation of Jews during the Holocaust also influences the opinion of both secular and religious Jews against cremation.

Eastern Orthodox Church prohibits cremation because it as a departure from the belief in resurrection. Mormons, or The Church of Jesus Christ of Latter-day Saints (LDS), strongly support burial over cremation, although the church allows cremation in cultures where it's customary.

The importance and sacrament of the body, as well as the fact that groups that opposed the church advocated cremation, led to the Roman Catholic Church's long-time opposition to cremation, although it wasn't technically against church dogma. In the 1960s, canon law was relaxed and the church reiterated that cremation was allowed without penalty. Requiem Mass can be held with a body that would be cremated or, upon permission of the local bishop, with the cremated remains.

Protestant denominations have historically been more open to the idea of cremation and even advocated for burial reforms at the turn of the century.

While religious views and historical traditions have a strong influence on funerary practices, so do societal, economic and ecological needs. As more people look into cremation as a viable funerary option, they might find it's not as mysterious as they thought.