A History of Drone Strikes 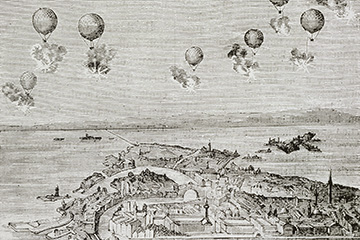 It turns out you have to take wind direction into account when trying to attack your enemy via balloon bomb.
DeAgostini/Getty Images

Militaries have been trying to attack one another with unmanned aircraft for more than 150 years. It all started in July 1849 when the Austrian army, after laying siege to Venice, tied bombs to balloons and floated them over the city. A timed fuse was supposed to release the bomb over the City of Canals, but, ironically, strong winds blew many of the balloons past the city and above Austrian encampments on the other side [source: Overy]. Both the Union and Confederate armies tried similar attacks during the American Civil War, but like the Austrians, their attempts were usually way off target [source: Garamone].

The Wright brothers' invention of piloted, powered flight in 1903 pushed drone experiments away from balloons and toward airplanes. The earliest prototypes, developed by the American military during World War I, were simply modified airplanes that could be pre-programmed to hit enemy targets. Despite some limited success, these early drones could not be recovered after an attack, and tests showed them to be too unreliable and imprecise for combat duty.

Shortly after the war, advances in radio control allowed unmanned aircraft to be guided in real time, and on Sept. 15, 1924, an American-designed Curtiss F-5L became the first aircraft to take off, maneuver and land by remote control [source: Keane and Carr]. Similar technology powered the U.S. Navy's remotely piloted Curtiss TG-2, which conducted the first successful remote torpedo attack during an April 1942 test strike on a practice warship [source: Grossnick].

Drones got even more effective during the Cold War. In the early 1960s, the Ryan Aeronautical Company developed the Lightning Bug, a reconnaissance drone that could be recovered by parachute. Later, the company adapted the design for a new weapon known as the BGM-34A. During a test flight on Dec. 14, 1971, this drone became the first to strike a target with air-to-surface guided missiles, earning its place in history as the first modern UCAV. While the Israelis successfully used the new drone against Egyptian armored vehicles and missile sites during the 1973 Yom Kippur War, it never saw action in Vietnam because the Americans felt it wasn't as good as manned technology [source: Clark].

The military continued to use drones throughout the end of the 20th century, but they were mostly reserved for reconnaissance missions. That's how the Predator drone got its start in 1995, but by Feb. 16, 2001, it was outfitted with Hellfire missiles — just in time for the U.S. response to the Sept. 11 terrorist attacks [source: Matthews].

In 1936, the U.S. Navy put Lt. Cmdr. Delmar S. Fahrney in charge of its Radio-controlled Aircraft Project. In a report later that year, he became the first person to term aerial targets "drones," a name that lives on today [source: Keane and Carr].