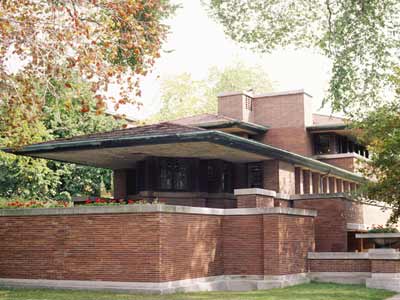 The Robie House in Chicago
© iStockphoto/Kickstand

Now that we've learned a little more about the man, it's time to take a more in-depth look at his life's work. On the next few pages, we'll delve into a few of Wright's creations and their unique, often groundbreaking characteristics. Impossible to rank, we've assembled a short list that attempts to demonstrate both the diversity of his work, and the beauty and creativity he employed while designing and building his creations.

The Robie House: The Frederick C. Robie House was Wright's prairie style masterpiece. In the first decade of the 20th century, Wright pioneered prairie style homes, which emphasized the horizontal, while at the same time, working to eliminate the feeling of boxiness that is often inherent in the shapes of houses, using features like cantilevered roofs and glass corners. The Chicago Robie House had all of this -- including a roof that cantilevered a full 20 feet (approximately 6 meters) beyond its last support and art-glass details.

It was also around this time that Wright affected his lifelong look -- wide-brimmed hat and superfluous cane. This fashion trend was another part of the long reform from Victorian-era styles, a push made by many in the turn-of-the-century American Arts and Crafts Movement. Wright's prairie style days would come to an abrupt end in 1909 with his departure to Europe with Mamah, although some aspects of it would show up in his later work.

The Ennis House: The Mabel and Charles Ennis House in Los Angeles was one of Wright's textile block houses, which he built in the first half of the 1920s. The Ennis House was constructed of grooved blocks of concrete that slipped together like puzzle pieces with steel bars as stitching -- hence the textile aspect. His textile block house had carved and patterned tiles, strong geometries and a certain castle-like grandeur.

A picture of Fallingwater undergoing restoration in order to preserve the home.
Laura Farr/Getty Images

Fallingwater: Probably the most well-known example of Wright's work -- and the one that put him back on the map in the mid-1930s -- is the Liliane and Edgar J. Kaufmann House nestled in the Pennsylvania Appalachians. Overhanging a waterfall, the cantilevered design (with terraces extending unsupported over the water) includes a staircase extending below the living room all the way to the surface of the water below. Interestingly, the waterfall that so gracefully accents many images of Fallingwater isn't visible from the house itself. One has to hike to see it -- a design plan Wright felt would heighten the excitement and retain the sense of awe one would feel upon making the effort to view the cascade.

­ Wright visited the future site of the Kaufmann's vacation home twice in the more than year-long span between when the Kaufmanns first approached him about the project and when he set about putting any designs on paper. When he did, the plans leapt from his mind's eye fully formed onto his tracing paper. Laying down the designs for one of the most famous homes in America took just two hours.

­ Read about more Wright's architecture on the next page.