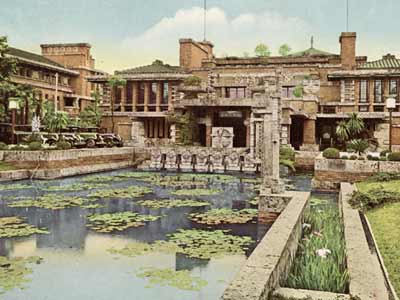 The main entrance of the Imperial Hotel, taken in 1935
Hulton Archive/Getty Images

­ We saw a portion of the domestic side of Wright's architecture on the last page. On this page, we'll examine some of the commercial projects that he completed.

The Imperial Hotel in Tokyo, which has since been demolished, was an impressive building several years in the making. From 1916 to 1922, Wright was back and forth between Tokyo and Taliesin. Miriam Noel, at this point still his mistress, would travel with him to Tokyo.

The Imperial Hotel was shaped like an H, with the main lobby and public rooms located in the central area. Gardens and pools filled each large courtyard. The intricate interior was full of little terraces, balconies and courts, with almost every room different from the next. Famous for surviving more than one earthquake intact, Wright built the Imperial Hotel keeping in mind several considerations for safety during a quake. Floating foundations and flexible wall structures allowed for possible moving and shifting, green copper roofing was installed instead of potentially lethal flying tiles and multiple pools were prepared (in part) for the event of a fire. Walls were built thicker at the base to contribute to the building's low center of gravity and the wiring and pipes ran through trenches in the ground. During the Great Kanto earthquake of 1923 that took the lives of 150,000 people, the Imperial Hotel (which coincidentally had been scheduled to officially open that day) was used as a refuge and headquarters for survivors.

The Johnson Wax Administration Building is a gently-edged rolling building with a sleek, streamlined feel. Contained within its attractive exterior is a unique-looking interior space -- an enormous high-ceilinged work room is ringed with a balcony mezzanine, while floor-to-ceiling columns blossom at the top creating a lily pad effect.

The Price Tower is the only skyscraper Wright ever built, which is not surprising with his love of all things homey, organic and horizontal. While the Price Tower departs from his usual design in some ways, it still conforms to it in one way, with its inspiration coming from the naturalness of a tree. The 221-foot-tall (67.36 meters), 19-floor building was influenced by plans for an earlier skyscraper that was never constructed, but Wright finally got to build a version of his vision in Bartlesville, Okla. The building was designed to include office, retail and living space, and now houses an art center, hotel and restaurant. The center is made of four faces of the pinwheel, with each side completely unique. Some have said the building appears more like a sculpture than a skyscraper. The stunning colors on the interior of the skyscraper are in places set in geometric murals of rich red, lime green, sky blue and gold, highlighted by the green-tinged stamped copper plates and gold-tinted glass of exterior of the building.

­ The Solomon R. Guggenheim Museum is Wright's only Manhattan building. The curvy, spinning top-like exterior of the Guggenheim Museum sets it apart from the boxy edifices it neighbors. First commissioned in 1943, the museum wasn't completed until 1959. Solomon Guggenheim's death and the need for approval from the New York City Building Department were just two of the many challenges the proposed museum faced, but eventually it was built, with four and a half feet (1.317 meters) jutting out over 5th Avenue.

There are still several other important styles Wright's architecture embraced over the years. Read about some more on the next page.