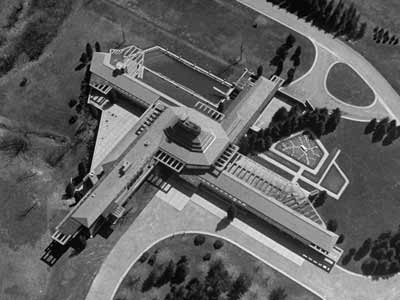 Wright designed and built many large estates over his career, as well as many that were smaller and more affordable. And then there were Taliesin and Taliesin West, which not only served as a home for the architect himself, but also for the Taliesin Fellowship and later the Frank Lloyd Wright School of Architecture.

Wingspread: We talked a little about the Johnson corporate projects on the last page, but we didn't really discuss the house he commissioned. Called Wingspread (but also known as the Herbert F. Johnson House, the 14,000-square-foot (1,300.6-square-meter) house is appropriately named; it was built with four wings spreading out from a central living space. The designs, which specified a master bedroom wing, children's wing, kitchen wing and guest/garage wing, were part of Wright's architectural philosophy -- houses should be designed in a way so as to support harmony and serve as a sanctuary for family life, allowing people to come together, but giving them privacy as well. Like many of Wright's houses, the interior is colored in a host of organic hues, using cypress, brick, oak and other natural building materials. The central living area is a giant octagonal room with a 30-foot-high (9.14-meter-high) chimney dominating the center, domed with three tiers of windows circling the elevated ceiling. The master bedroom wing overhangs the living room, and from that mezzanine a staircase winds up one side of the fireplace up to an observation tower.

The Lovness House: The Donald and Virginia Lovness House and Cottage is an example of a style of architecture Wright developed later in his career called the Usonian house. Houses in the Usonian style were similar to the large estates that dominated his earlier career, but on a much smaller scale. In the post-Depression years, when materials were scarce and costly, Wright decided to turn his attention once more to affordable housing, but with a much different focus than his textile block house. Unlike those palatial fortresses, the Usonian houses were small but stylish additions to the landscapes they nestled in, maximizing the use of interior space (while sacrificing some closets, among other things) in a variety of manifestations. Despite always striving for improved and less costly building methods, Wright never sacrificed the interior beauty and elegance that stands as the hallmark of his designs.

Wright's Usonian homes became a model for suburban development, although his imitators certainly didn't always produce as elegant or organic a product. His innovations in affordable housing paved the way for a rapidly growing middle-class suburban population. Usonian homes were often built with an L-shaped floor plan, but the Lovness House and Cottage were a variation. Reminiscent of the horizontal lines of the Robie House, the exteriors of both structures were long, textured stone mosaics. Wood and stone also comprised much of the interiors, where natural light flooded into surprisingly spacious-looking living spaces.

Taliesin and Taliesin West: Taliesin, meaning Shining Brow, was the name of a Welsh bard and poet, as well as a mythical Welsh seer and visionary. It was an alluring name to Wright, which he used for both his home in Spring Green, Wis., and Scottsdale, Ariz. The original Taliesin was rebuilt several times over the years due to house fires, as well to expand and renovate it when he and Olgivanna began the Taliesin Fellowship in 1932. With courtyards full of wildflowers, Taliesin mirrors the sense of rolling, rocky hills and rugged pasturelands of southwestern Wis., in tans, beiges and greens. Stone, prominent in almost all Wright's work, was not neglected here. The original home of the fellowship, Taliesin was soon used only during the summer months with the rest of the year spent in Arizona.

The first exodus of the fellowship to the land of Taliesin West in sunny Arizona was in the winter of 1938, although the buildings would take several years to complete. Taliesin West has drafting studios, classrooms, exhibition areas, two theaters and workshops for a variety of arts, including printing, photography, metalworking, sculpture, model-making and pottery. The serene complex of buildings also includes living spaces, and all are closely in tune with the surrounding desert, encouraging an appreciation of nature and the ecology of life, and imitating the shape of the land.

The Taliesin Fellowship would become a close-knit group, with many apprentices feeling like adopted sons and daughters. We'll learn more about this dynamic assemblage on the next page.